Invasion of Europe had a helping hand from Vicksburg 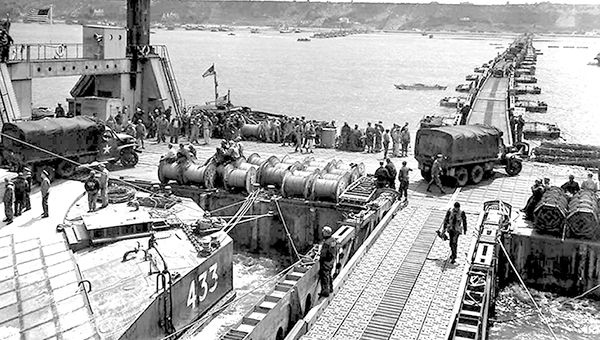 Vehicles move toward the beach after picking up supplies from a pier at one of two Mulberry harbors. Engineers and researchers at the Waterways Experiment Station performed wave and hydraulic tests on models for the caissons that were used to form the breakwater for the harbors. (Photo courtesy U.S. Army Engineer Research and Development Center)

When Allied forces hit the beaches in Normandy, France, 75 years ago today, the assault’s success and the Allies’ future success in defeating Nazi Germany were aided by work in Vicksburg.

Researchers and engineers at the U.S. Army Engineer Research and Development Center, then known as the Waterways Experiment Station, were involved in several programs that helped select landing sites, deceiving the Germans about the invasion and ensuring troops would received sufficient supplies after landing.

They worked with British and French intelligence on soils, erosion and tide information to investigate the French Coast for possible landing sites.

Workers also developed models for the coasts of Calais and Cherbourg.

They helped develop inflatable cannons, tanks and other equipment for Operation Fortitude, the creation of a fake army group under Gen. George Patton based near the Pas de Calais to deceive the Germans and draw attention from the real invasion site.

But one of the more important roles played by WES was its assistance with the Mulberries, two artificial harbors designed and constructed by the British to unload supply ships off the Normandy Coast immediately following the invasion.

The harbors were intended to supply the troops in Normandy until the capture of the port of Cherbourg.

“Normandy was selected to give the element of surprise because the Germans were expecting the invasion to come at the shortest part of the channel,” said ERDC historian Terry Winschel, “but Normandy had no ports large enough to accommodate the vessels needed to supply the allied forces once they established the beachhead.”

Waterways, he said, helped test the concrete caissons that helped form the artificial harbors large enough to accept supply vessels. The harbors were installed at Normandy at Omaha and Gold beaches.

“Garbis Keulegan was in charge of a lot of the hydraulic studies here, and he was called away and came home one day and told his wife and daughter that he was going away to teach at MIT (Massachusetts Institute of Technology) and left.

“He was doing top secret work for the government for the D-Day invasion looking at tidal pressures and breakwaters for the mulberries.”

That research was done in a pool at Waterways, where breakwater models were built and tested and caisson models and tested.

“They had to determine the wave and tidal pressures on those breakwaters,” Winschel said.

According to the Encyclopedia Britannica, each Mulberry harbor consisted of roughly 6 miles of flexible steel roadways that floated on steel or concrete pontoons called “Beetles.”

The roadways terminated at great pierheads, called “Spuds,” that were jacked up and down on legs that rested on the seafloor. The structures were sheltered from the sea by lines of massive sunken caissons, lines of scuttled ships, and a line of floating breakwaters.

The Mulberry harbor at Omaha Beach, was destroyed by a violent storm that hit the Normandy Coast June 19. The Mulberry at Gold Beach survived the storm and continued to support the Allied armies for 10 months.

“Gold Beach handled 12,000 tons of equipment and 2,500 vehicles daily,” Winschel said. “That’s pretty remarkable. That gives you some idea of the supplies that were necessary to support the establishment of the beachhead and pushing inland.”

He said Waterways engineers and researchers also did work on pontoon bridges with pneumatic floats and the rigid floats that supported the Allied drive inland after the landings.

They also worked to develop airfield landing mats that were used extensively in the Pacific, and were involved in other projects like dozer tanks using bulldozer blades, and developing a civilian metal detector for use as a mine detector.