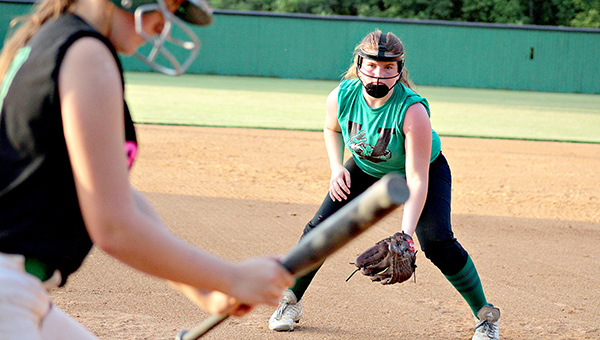 While Warren Central’s Dana McGivney and Vicksburg High’s Brian Ellis are all for promoting safety in the game, they both said some practical issues of wearing the masks and questions about their durability raise some doubts about the rule’s effectiveness.

“We look at the safety aspect of it, but not the overall safety aspect. None of these masks are rated for their durability. We don’t have a standard for these masks,” Ellis said. “Is it the cure all? No. We’re still going to have issues that come back to haunt us.”

Mississippi recently became the first state in the country to mandate first basemen, third basemen, pitchers and catchers all wear protective facemasks. Previously, the masks were commonly used but not mandatory.

The push for the new rule was led by Starkville High School first baseman Ally Barefield. As a Girl Scouts project to qualify for the Gold Award, the organization’s equivalent of the Boy Scouts’ Eagle Scout, she put together a proposal and pitched it to the MHSAA at both the district and state level. It passed by a 35-1 vote at the MHSAA’s state meeting.

In fast-pitch softball, corner infielders often creep in to cover bunts and can be as close as 25 feet from home plate. If a batter takes a full swing and makes solid contact, there’s no time to react to a line drive.

Several other states have considered a similar rule in recent years, but none have passed it. Neither the National Federation of High Schools nor the Mississippi Association of Independent Schools has mandated their use, either.

McGivney and Ellis said there are some practical issues with their use that can cause problems. Masks can actually cause more problems than they solve, they said, by moving around a player’s head because of movement or a bad fit. When a mask slides out of place it can obscure a player’s vision and cause them to get hit in other places on balls they might otherwise have seen.

“Pitching-wise, you’re spinning and moving. If that mask isn’t tight it’s going to cause other problems. You don’t see somebody that gets their nose broken continue to wear that cover longer than they have to. As soon as you can take it off, you do it because it’s uncomfortable and impedes your vision,” Ellis said. “It’s a scary thing when you see it happen, and it’s happened. But there are incidents when somebody hits you and it’s not in the face.”

An uncomfortable mask, or not being used to playing with one, can also get into a player’s head, McGivney said. Similar to obscured vision, that can lead to other injuries.

“I feel like giving them a mask makes them more timid. With the mask, you’d think it would make them more secure but sometimes it does the opposite if they’re trying to adjust it or get used to it,” McGivney said.

Ellis also expressed concerns about safety standards of masks and whether any protective device can fully blunt the force of a hard hit ball.

“You’re asking a player to put on something that’s not been proven to withstand a softball coming at 95 mph. If it hits the mask, it’s going to be like an F5 tornado hitting Walmart. It’s going to do some damage,” Ellis said.

In the end, both Ellis and McGivney said the use of masks should be up to the individual player and their parents. The coaches certainly don’t discourage their use, but also believe it should not be mandatory.

They also said enough players wear them already that it won’t be a difficult rule to implement.

“I’m 50-50 on it. I don’t think it should be mandatory, but if they want to wear it that’s fine,” McGivney said. “Usually our pitcher, first baseman and third baseman wear them. It won’t be a big transition.”