The forgotten people of the Yazoo Backwater flood 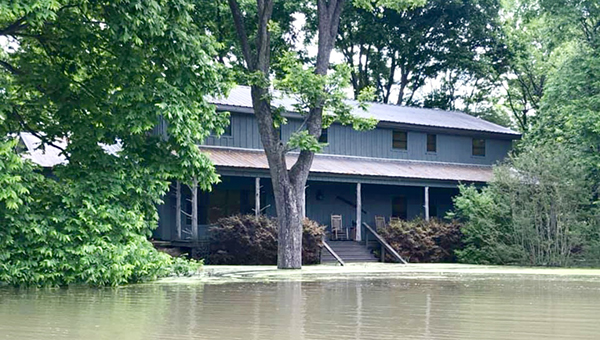 Eagle Lake has been fairly covered through local and state news, as well as social media. My heart aches for everyone affected and I have the upmost respect for each and every individual who tried to save this community, as well as the efforts in preparing and trying to save areas in Issaquena County (ex. Valley Park). My prayers are with all of you as well.

This column is specifically for the forgotten people of the Northern Redwood community in Warren County past the Sunflower Canal. This is a small community of 24 residential homes.

On Jan. 17 hunting season was closed. This area started taking on water in February. Three residential homes were evacuated on Floweree Road. While some residents remain in this area, they had to start boating to and from their homes since March. They boat to the north end of Floweree Road, where it meets U.S. 61 North to retrieve their vehicles and leave their vehicles when they return.

While many, including the Mississippi Emergency Management Agency know of these 24 residential homes, it seems they have been lost, forgotten.

“Something is wrong with this situation and it is definitely a politically man made mess” said Stormy Deere, a remaining resident in the Northern Redwood community.

I requested to speak with Ms. Deere because she has been a tremendously outspoken advocate for her community, especially on social media. Ms. Deere’s home is surrounded by water and has one foot before the water starts entering her home. She said all the counties and areas affected by this flood are all fighting the same fight, but somehow this particular area is getting lost.

William Banks is the District 2 County Supervisor Deere advised. She has personally not heard from him. She is aware he went to Eagle Lake, but wonders why is Mr. Banks not speaking on behalf of every part of District 2? (this includes her area).

Ms. Deere heard there were hotels offering a discount for people of Eagle Lake who have been displaced. The Waterview Casino is presenting checks to Eagle Lake victims and donating water.

As Ms. Deere said, and I agree, very generous and much needed, as she said “we are all fighting the same fight, but what about us?”

Earl Wallace, chief of the Eagle Lake Fire Department indicated on his social media account on June 5 (then shared by many others) that “at this time we have sufficient funds to survive this flood.”

Mr. Wallace also said if anyone wanted to donate to those affected by this flood in the lower delta to please send your donations to the United Way of West Central Mississippi, where 100 percent of donations will go to those affected.

There is a committee already working on this and the committee includes Chief Wallace.

Deere believes Chief Wallace has done an amazing job with the flood and is hopeful her area will be included for donations.

Deere said to the best of her knowledge, the United Way has only reached out to one resident of her area, but she has not heard from them. She did say, in her opinion, she feels that U.S. Sen. Roger Wicker and U.S. Cindy Hyde-Smith were working hard in Washington, as well as Mississippi Secretary of State Delbert Hosemann.

Even a 24 home residential community needs assistance and an advocate. Ms. Deere is basically living in her home watching the water rise until she is forced to evacuate when her home is inundated with water.

I wrote this specific piece to shed light on the Northern Redwood Community past Sunflower Canal. I asked Ms. Deere what could people do for you? Sadly her answer was “nothing at this moment.”

To all those affected by this horrific flood, our hearts, our thoughts and our daily prayers are with you.

To all those who have written to local, state and federal officials, keep writing! There is power in numbers. Let all our voices be heard and never stop. Never lose hope and never give up!

Gina Hendrickson is a volunteer community columnist for The Vicksburg Post.