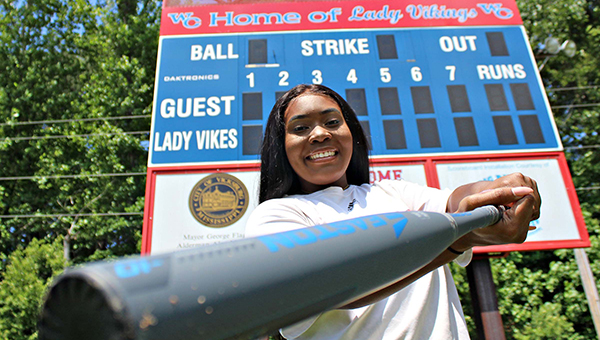 The telltale sign of Kelsey Lockridge’s skill as a softball player wasn’t a ball she crushed over the fence, or one she neatly picked from her shortstop position to rob a hit. It wasn’t a line drive to the gap or stealing a base.

It was the six intentional walks she received in a two-game span.

During a first-round playoff series, Oxford pitched to the Warren Central senior twice. She roped a single the first time and blasted a home run the second. Every other time she came to the plate, including late in Game 1 when Oxford was on the brink of being run-ruled, she was told to go to first base via an intentional walk.

It was a sign of both fear of what she could do at the plate, respect of what she was likely to do, and a sign that Lockridge was the best player around — certainly good enough to be selected as The Vicksburg Post’s softball Player of the Year for the second consecutive season.

“It feels really good, honestly. It wasn’t really expected, because I’ve had an up and down season. But I’m really grateful for it,” Lockridge said of the award.

Every stat was better than in 2018, when she hit .478 with only one home run, 13 doubles, 17 RBIs and 27 runs scored. Still, the Alcorn State signee said it felt like a bit of a down year. That might just have been because of the high standards she’s set for herself, however.

“I feel like I could have been better. I wanted to be better for my team. I had moments where I got too anxious and I maybe hit a ground ball or a fly ball, where I could have been more relaxed and focused on hitting it where I needed to,” Lockridge said. “The girls behind me had a great season, too. As long as I was getting on base and they were moving me around then that was considered good.”

Part of that feeling might come from her reputation as a fearsome hitter. As it grew over five years as a starter — she played two seasons at Vicksburg High and then transferred to Warren Central as a sophomore — opponents were more careful with what they threw her.

It culminated with that infamous Oxford series. Even when trailing 11-3 in the fifth inning of Game 1, with two runners already on base, the Chargers opted to put her on rather than risk her ending the game with one swing. Lockridge said it was mostly frustrating because she realized her high school career was winding down and wanted to make the most of the few at-bats she had left.

“At one point I feel like a walk is a walk. I’m still getting on base for my team,” Lockridge said, before adding with a laugh, “But at the same time I’m like, ‘Please let me hit the ball! This is my last year playing here and I just want to hit!’ But if it helps my team, I’m good.”

Warren Central coach Dana McGivney said that sort of attitude is a sign that Lockridge has grown into a team leader the past couple of years, as well as of a maturity that will serve her well going forward.

“The first couple of seasons she would have been really frustrated or upset and it probably would have affected her defensively as well,” McGivney said. “This year she really took on the role of being a team leader. Not just necessarily at the plate, but, ‘Hey, this is what I have to do for my team,’ even to the point of not swinging at bad pitches and taking the walk when she wasn’t getting good pitches. That’s a sign of maturity for her.”

Lockridge will now head to Alcorn State as only the second Warren County fast-pitch player to ever sign with a Division I program, and the first to do it straight out of high school.

Lockridge was fired up for the chance to continue her softball career.