PCA’s Yocum goes out as a winner 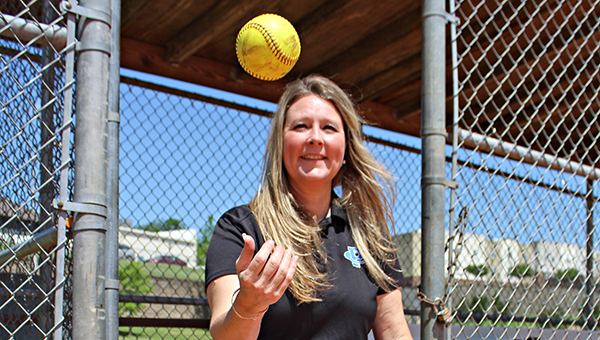 Porter’s Chapel Academy’s Amanda Yocum is the 2019 Vicksburg Post Softball Coach of the Year. Yocum, who is stepping down after 12 seasons at PCA, led the Lady Eagles to a 19-9 record in her final season. (Ernest Bowker | The Vicksburg Post)

She started as an assistant at Warren Central when that team was first formed in 1999. She pulled double duty for a time as the head coach at both Vicksburg High and Porter’s Chapel Academy, eventually committing full to the latter.

Finally, after all this time, she’s leaving it behind and going out on top.

Yocum led PCA to a 19-9 record this season and its seventh consecutive appearance in the MAIS South State tournament in what turned out to be her final season. She’s leaving coaching to take a job with the federal government, but not before collecting The Vicksburg Post’s softball Coach of the Year award one last time.

“We started with nine players and I played several games with eight my first year, just so we could put a team on the field,” Yocum said. “I’m extremely proud, because for three or four years we were ranked in the top 10 for private school teams. We made the state tournament five years in a row. We won two district championships. About the only thing we didn’t do was win a state championship.”

Yocum’s last coaching job might have been among her best. She lost six seniors from the 2017 team — the Mississippi Association of Independent Schools plays its season from August to October — and had to shuffle around some of the returning players.

It wasn’t always smooth, but they got the job done. The Lady Eagles got to the MAIS Class AAA South State tournament and came within one victory of advancing to another state tournament.

“We graduated six starters and it gave some girls an opportunity to step up. We had a whole new outfield. I saw some great things in those girls,” Yocum said. “They were always looking at the girls one or two years ahead of them to get it done and now it was on them. They really rose to the occasion. A lot of the losses we took were close. We lost a few district games and finished third, but it came down to the sixth or seventh inning in most of them.”

When the season was over, however, life sent Yocum in a different direction. She got an offer for a new job outside of education that was too good to turn down. Her daughter Cameron graduated in 2018 and her son Luke is set to graduate in 2020, so the timing also felt right to step away now.

“I got a call in November for this new job and felt that that opportunity probably wouldn’t come around again,” Yocum said. “When I coached basketball I felt like I had done all I could do with them and it was time to turn it over to somebody else. Same thing here. I feel like I left it in a good position, where they weren’t going to completely start over with a whole new group.”

Yocum thanked her assistant coaches over the years for helping the program run smoothly.

“I’ve had a lot of great help over the years. Dr. (Steve) Krapac helped us get going. Lee (Embry) and Mark (Hinson), and Billy White have helped me the last couple of years,” Yocum said.

Yocum will turn the program over to Chandler Ellis, a former Vicksburg High star and the daughter of VHS coach Brian Ellis. Chandler Ellis played Division I softball at Mississippi Valley State, and Yocum feels she’s stepping into a pretty good situation for her first coaching job.

Among the returning starters for PCA is senior pitcher Hannah Embry, the 2017 Vicksburg Post Player of the Year. In 145 2/3 innings this season, Embry had 196 strikeouts and a 2.07 ERA. She started in the circle for 25 of PCA’s 28 games.

PCA should also benefit from a drop in classification that will allow it to avoid some of the bigger schools that knocked it out of the state tournament in recent years.

“This group of seniors will be the group I started with as sixth-graders. Three of the seven have been starters since sixth grade, in Hannah’s case, or ninth grade. I think they’re in a good position,” Yocum said. “Then the group coming up has four tournament players and that’s going to give them some depth.”