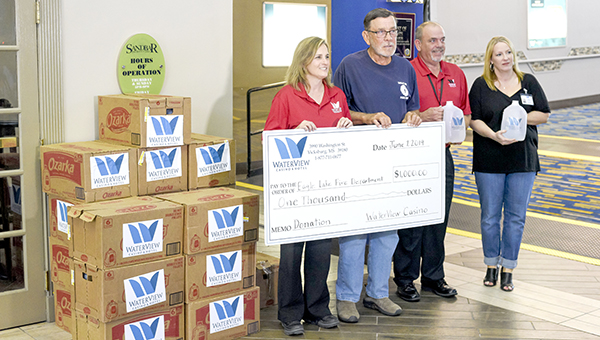 The Eagle Lake Volunteer Fire Department received a $1,000 check and 20 cases of water from WaterView Casino during a presentation Friday.

Casino general manager Penny Bankston said the decision to make the donation was made after seeing accounts of the disaster caused by rising waters and prolonged flooding in the Mississippi Delta.

“Eagle Lake is very close to us in proximity, and seeing the stories of families displaced, the animals, we felt we needed to step up and help out particularly the first responders who are trying to handle such a terrible situation,” she said.

“We’re kind of isolated, because basically all of our roads are shut off,” Eagle Lake Fire Chief Earl Wallace said. “It’s like 64 miles from I-20 just to Eagle Lake.”

“We appreciate WaterView for stepping up to the plate,” he said, adding the fire department will donate the money to United Way of West Central Mississippi “to help the public out.”

Wallace said the fire department is in good shape financially thanks to donations from county residents.

Wallace said he has been “in and out” of Eagle Lake and was going back for the weekend for planning meetings to deal with recovery once the waters recede.

The combination of high water from the Mississippi River and flooding in the Yazaoo River Backwater Area has isolated and flooded Eagle Lake, forcing many residents in the area to leave as the backwater rose to more than 98 feet on May 15. The level Friday was 97.69 feet.