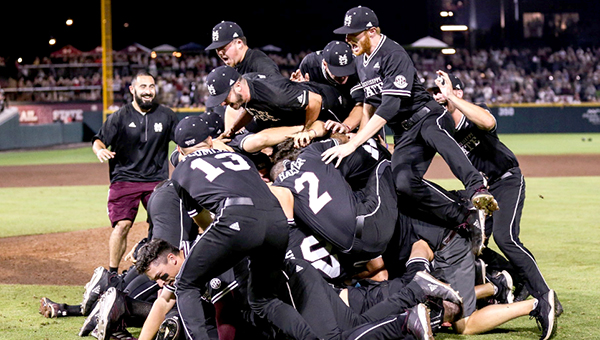 STARKVILLE (AP) — Jake Mangum started the ninth inning with a sharp single that sneaked through the left side of the infield. A few batters later, Elijah MacNamee launched a three-run homer deep into the seats beyond left field.

Just like that, the celebration was on: Mississippi State’s seniors had left no doubt the Bulldogs were headed back to Omaha .

It was the Mangum-MacNamee finale that really got the 11,000-plus fans at Dudy Noble Field going. Mangum’s 378th career hit — and MacNamee’s long homer — are moments he’ll remember for a long time.

“If you think I can put that into words, you’re crazy,” Mangum said. “You can’t write it any better. My first hit at Dudy Noble was the same as my last, the six-hole, and of course it was the first pitch.”

Mississippi State (51-13) broke the game open with four runs in the third inning. Stanford pitcher Erik Miller hit a batter and walked two during the rally, including one with the bases loaded. Skelton’s bases-loaded triple was the big blow, bouncing high off the right-center field wall to make it 4-1.

Stanford’s Christian Robinson and Brandon Wulff collided while trying to make the catch in front of Mississippi State’s rowdy outfield crowd. The umpires reviewed the play to see if there was fan interference, but ruled that none had occurred.

The game stayed fairly tight until the ninth, when MacNamee crushed the three-run homer that ended any realistic hope for Stanford.

Stanford (45-14) had a great start to the game when leadoff batter Kyle Stowers hit a solo homer for a 1-0 lead. But Plumlee (7-4) was brilliant from that point forward and the senior right-hander didn’t allow another hit until the seventh innings. He struck out six and walked one.

The left-handed Miller (8-3) took the loss, giving up four earned runs over 2 2/3 innings. He gave up just two hits but walked four.

“We battled them tough,” Stanford coach David Esquer said. “We just gave them a little too much and didn’t take enough away from them. It was a classic super regional where the game is at the highest level.”

Mangum had two more hits Sunday, raising his season total to 103. The senior’s 378 career rank fifth in NCAA history. He could realistically rise as high as No. 3 if he plays well in the College World Series.

Mangum’s biggest highlight during this super regional was actually in the field. He robbed a potential grand slam in the first inning of Game 1, jumping above the fence to grab Andrew Daschbach’s drive to center.

“He’s just a star,” Lemonis said. “And what’s nice about it is he’s what Mississippi State baseball is. Tough. Hard-nosed. Play hard.”

Skelton with the glove

Skelton’s three-run triple was just the start of the highlights for the junior catcher. He had two terrific defensive plays during the fourth inning that stopped a potential Stanford rally.

The first was on a difficult bunt that dribbled down the third base line. Skelton pounced on it, spun and threw a missile to first that got Tim Tawa for the second out. Then he threw out Duke Kinamon, who was trying to steal third, for the final out of the inning.

Stanford closer Jack Little came into the game much earlier than usual, taking the mound in the fourth inning to try and slow Mississippi State’s offense.

It worked for quite a while. Little went 4 2/3 innings, keeping Mississippi State scoreless until the ninth inning when the Bulldogs rallied for three.

Mississippi State will play the winner of the Auburn/North Carolina super regional in the opening round of the College World Series.

Stanford falls just short of making the CWS for the first time since 2008.

Everyone who has a yard to manage understands what happens when you add a bit of warm weather, with some... read more