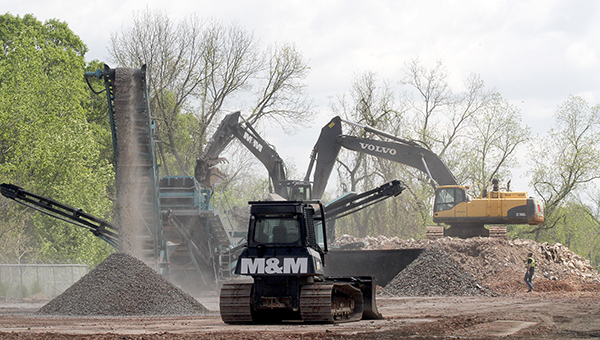 Crews complete the demolition of the former Kuhn Memorial Hospital in this file photo from April. City leaders are now inviting proposals from developers to see what the site could be used for. Proposals will be reviewed by a special committee and then presented in August to the Mayor of Board and Alderman. (File Photo)

Developers are being sought by the city of Vicksburg to purchase and transform the Kuhn Memorial Hospital property on Martin Luther King Boulevard.

Monday, the Board of Mayor and Aldermen approved a resolution to seek proposals from developers interested in developing the former 12.8-acre state hospital site, which has been cleared of buildings.

“This is the first step of trying to find a developer interested enough to develop (the property) in the way we think it ought to be,” Mayor George Flaggs Jr. said. “We had some interest, but what this does, it makes it more competitive.”

According to the resolution, proposals will be opened at an Aug. 19 board meeting.

The board in April 2016, approved a resolution adopting and authorizing a 33-page urban renewal plan for the property that included finding a developer or nonprofit agency to develop it into a multipurpose residential/commercial development with recreational facilities.

City attorney Nancy Thomas said the resolution gives potential developers “about 60 days to do their due diligence and submit back to us what they propose for the property.”

She said the proposals would be reviewed by a committee that will then make a recommendation to the board.

According to the resolution, the bid price for the property must be fair market value.

The Warren County Assessor’s Office puts the property’s value at $64,000.

Developers are also required to present a detailed description of the development that includes construction costs and a timeline for completion, a site plan or master plan for the development and financial and legal ability to complete the project.

The Kuhn demolition began with a special ceremony Feb. 5 that drew people who were once a part of the hospital staff when Kuhn was a state hospital.

Since then, the property was sold six times for taxes, and city officials tried for at least the past 10 years to get the property owner to clean the property and demolish or renovate the buildings on the site. The board on July 6, 2017, put the 12.8-acre property under the city’s slum clearance ordinance in a move to step up its efforts to remove the complex’s main building.

When the parties with an interest in the property failed to present plans to either raze or renovate the buildings by September, it cleared the way for the city to begin the process for their demolition.