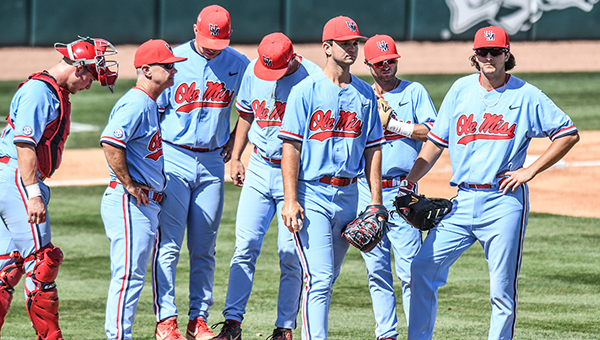 FAYETTEVILLE, Ark. – Anything that could have gone wrong for Ole Miss did go wrong Monday in Fayetteville.

The Rebels dropped game three of the NCAA Super Regional to Arkansas in ugly fashion, losing 14-1. The loss ends their season and halts a remarkable postseason run beginning in Hoover, Ala.

Ole Miss was able to get to Arkansas starter Patrick Wicklander quickly.  The Rebels drove Wicklander off the mound in the second inning. Ole Miss tacked one run on Wicklander in the first, but Arkansas coach Dave van Horn yanked his freshman well before the Rebels could do too much damage to him.

Gunnar Hoglund worked his way quickly through the first inning. He gave up a few deep fly balls, but recorded three outs on the first three batters faced.

The second inning went differently. After the first batter grounded out, the next four batters Hoglund faced — and five of the next six — reached base in the second.

Hoglund gave up four runs in the second inning. In the third, Hoglund would face just two batters — both of which reached base — before Bianco pulled him and went to the bullpen.

The change in pitcher did not change the direction of the game, or the outcome.

Arkansas recorded 12 hits on the day, including four doubles and two home runs. The Ole Miss offense couldn’t even begin to measure up.

Following the first inning score, a Cooper Johnson RBI single up the middle, Ole Miss went eight scoreless innings. The Rebels compiled two hits in the first inning and just four the rest of the game; not nearly enough to keep up with the Razorbacks.

With the win, Arkansas advances to the program’s 10th College World Series.

Nathanael Gabler is a sports writer for the Oxford Eagle.