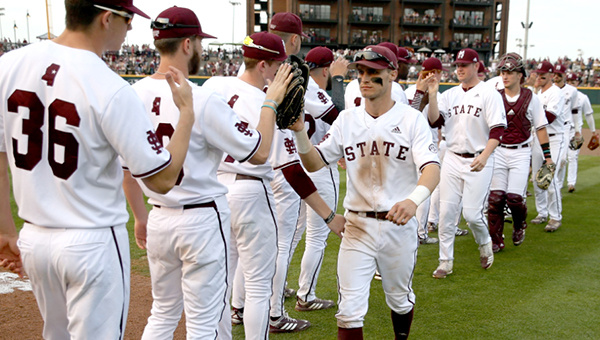 Mississippi State baseball players congratulation one another after an early-season win over Auburn at Dudy Noble Field. The two SEC rivals will meet Sunday in the opening game for each team in the College World Series in Omaha, Neb. (Blake Williams | MSU Athletics)

STARKVILLE – The Mississippi State baseball team found out its first assignment at the 2019 College World Series, as the program’s 11th trip to Omaha will begin on Sunday at 6:30 p.m. against SEC West Division foe Auburn on ESPN2.

Auburn marks the 25th different opponent for MSU at the College World Series, including its seventh SEC foe. It is the first time MSU will face an SEC opponent in Omaha since 1998 when the Bulldogs posted a win over Florida to open its stay, before losing to LSU in the next game.

All-time at the College World Series, Mississippi State has faced a conference opponent on seven occasions prior to this weekend’s matchup with Auburn and own a 2-5 mark in those contests.

The other game in bracket two features No. 2 national seed Vanderbilt and No. 7 national seed Louisville. That game will begin at 1 p.m. on Sunday, June 16.