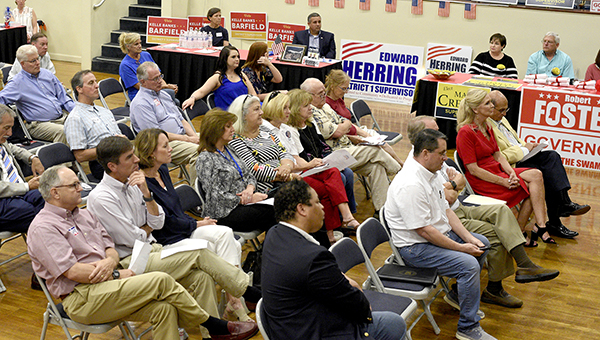 The Vicksburg Auditorium was transformed Saturday into election central as Warren County Republicans held its meet the candidates rally.

“We do this every four years,” said Karoline Finch, president of Warren County Republican Women, which put on the program.

“We pull the state and local candidates together to let the voters meet them. It’s crucial people know who they’re voting for. People don’t realize how important the primary elections are. We’re happy with the turnout. We have state candidates or their supporters here representing them.”

The area surrounding the auditorium, and the steps leading to the building, was covered with political signs for state and local candidates. People entering the auditorium were met by supporters handing out literature and stickers supporting candidates.

The auditorium was decorated along both sides with campaign signs, while tables with candidates’ literature covered the floor on either side.

More than 60 people, including candidates, their supporters and family members, and interested voters attended the rally to hear the candidates ask for their support and encourage them to vote Republican in the primary and general elections.

He said programs like the rally are important because “it’s everyone’s patriotic duty to get out and get to know the candidates and to vote for them in the primary elections.

“This is a good way for the people to get out and meet the candidates one-on-one.”