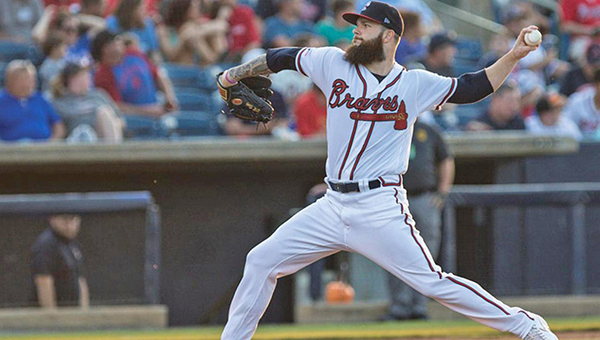 Dallas Keuchel pitches for the Rome Braves during a minor league start on Monday. Keuchel, the 2015 American League Cy Young winner, signed with the Atlanta Braves earlier this month and will pitch for the Double-A Mississippi Braves Saturday at Trustmark Park in Pearl. (Courtesy of the Mississippi Braves)

PEARL — A former Cy Young award winner will make a pit stop in Pearl on his way back to the big leagues.

The Atlanta Braves announced Wednesday that Dallas Keuchel is expected to pitch for the Mississippi Braves Saturday at Trustmark Park when the Double-A affiliate plays Mobile.

The M-Braves and BayBears will play a doubleheader beginning at 5:05 p.m. It was not announced which game Keuchel will pitch in. Each game is scheduled for seven innings.

Keuchel spent seven seasons with the Astros but was not re-signed after hitting free agency at the end of the 2018 season. The Atlanta Braves signed Keuchel on June 7 to a one-year contract that runs through the end of the season.

Keuchel is expected to make two or three starts in the minor leagues before joining the Atlanta Braves. Saturday’s game will be his second.

Keuchel pitched seven shutout innings for Low-A Rome on Monday. Keuchel struck out nine and walked one. He threw 77 pitches — 55 for strikes — and faced only two batters over the minimum as Rome beat the Charleston RiverDogs 1-0 in 10 innings.

Nearly 4,000 fans turned out to watch Keuchel in that game.

“It’s not necessarily a velocity game for me,” Keuchel said in a postgame press conference. “It never has been. In California when I was throwing, I think I was anywhere from 85 to 90. I was just trying to stay in control. You’re going to have an uptick in velocity no matter what, the adrenaline will be pumping and the competitiveness comes out. It was nice to work behind a few guys.”

Keuchel, a native of Tulsa who pitched in college at Arkansas, added that he was happy to join the Braves’ organization.

“It’s an organization I grew up enjoying,” Keuchel said. “I was a big fan of the Big Three, but who wasn’t? Just to be part of an organization that’s such class and has such a rich history, it doesn’t get any better than that. I’m just happy to be along for the ride.”