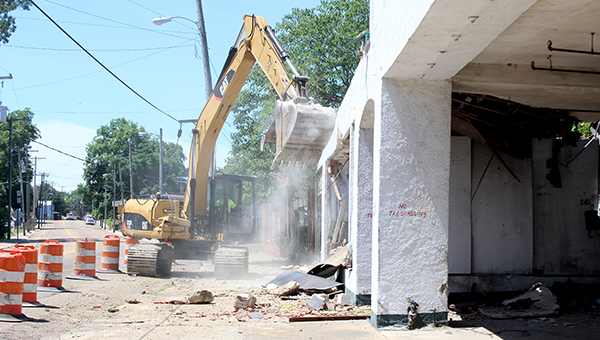 Crews began demolition Wednesday of a building at 2400 Washington St. The building, which has been home to a number of businesses throughout its history since being built around 1928, was ordered demolished under the city’s slum clearance ordinance. (John Surratt | The Vicksburg Post)

Workers for Socrates Garrett Enterprises Inc. of Jackson began work Wednesday to raze a dilapidated commercial building at 2400 Washington St. that has been a part of the city’s history.

The building was built about 1928 and occupied first by the Keith Williams Motor Company and in 1935 by the O’Neill Motor Company, which moved out of the building in 1937.

In 1939, the federal Works Progress Administration used the building for its lending department, and in the late 1940s and early 1950s, the building was the home of the Grego Buick Company and in 1954, the Abraham Buick Company.

Mississippi Hardware occupied the building in 1955 and stayed there until the company moved in the 1980s to the former M. Fine and Sons Manufacturing garment factory, which is the site for the proposed technology center.

Over the years, the building fell into disrepair and it was condemned by the Board of Mayor and Aldermen and put under the city’s slum clearance ordinance.

The board in April approved a bid of $66,000 from Socrates Garrett to raze the building.