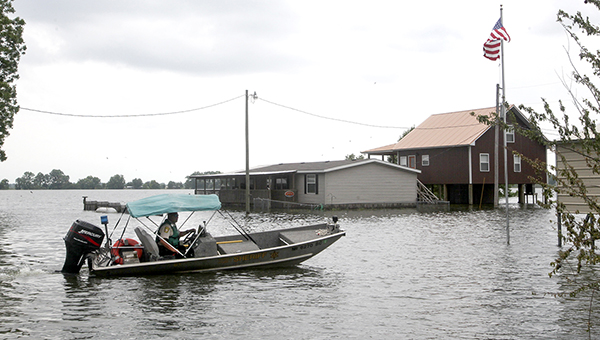 Deputy Johnny Beauchamp patrols flooded neighborhoods in the Eagle Lake community. Many of the streets in the lakeside community have been inundated with water, allowing Beauchamp and others with the law enforcement agency to patrol streets and neighborhoods by boat. (Courtland Wells | The Vicksburg Post)

Faced with weeks more flooding in a part of Mississippi that’s been underwater since February, one of the state’s U.S. senators on Wednesday asked President Donald Trump to order temporary pumps to the area to begin pumping water over the levee and into the already-swollen Mississippi River.

In a letter to Trump, Republican Sen. Cindy Hyde-Smith also renewed her advocacy for a permanent pumping station that would remove floodwater from the southern end of Mississippi’s Delta region. That’s a long-sought and much disputed project that was vetoed in 2008 by the George W. Bush administration as harmful to the region’s wetlands.

Levees and floodgates north of Vicksburg were built to prevent water from overflowing into the Delta when the river rises. As of Thursday, the river has been above flood stage at Vicksburg for 117 consecutive days, with floodgates closed much of that time.

The problem comes when the gates are closed and it rains in parts of northern Mississippi. That water flows into the south end of the Delta region and can’t drain into the river. Trapped inside levees with nowhere to go, the water has been high since February in what’s known as the Yazoo backwater area.

Floodwater has swamped 860 square miles, an area larger than the cities of New York and Los Angeles combined. Residents say it’s the worst flood since 1973, and it’s been getting worse again since Friday, when the U.S. Army Corps of Engineers closed floodgates for another time.

“There is an immediate need to remove the trapped floodwaters, which can only be accomplished by pumping it from the protected side of the levee system,” Hyde-Smith wrote. She likened it to the deployment of pumps to drain low-lying areas of New Orleans after flooding associated with 2005’s Hurricane Katrina swamped the city. She said the government could use money included in a disaster relief act passed last week to pay for dewatering.

She wrote that she wants temporary pumps “to remove floodwaters until a long-term solution is constructed.” That’s in line with a renewed push by Hyde-Smith and other Mississippi officials to get the veto reversed. Environmental Protection Agency Administrator Andrew Wheeler told Hyde-Smith in an April hearing that his agency is reconsidering its earlier rejection.

That’s exactly what environmentalists fear. They have opposed plans for permanent pumps, saying the titanic pumping station is a multi-hundred million dollar boondoggle that would most benefit large farmers in the area, while draining a complex of wetlands that are of national importance.

“To me, this is something of a Trojan horse to get pumps in place that would stay in place,” said Melissa Samet, senior water resources counsel for the National Wildlife Federation.

Samet noted any water pumped out of the region would have to go somewhere else, part of a multistate balancing act of who floods and who is protected in the heavily engineered Mississippi system.

“If you start pumping, you have winners and losers,” Samet said, arguing that it would be better to elevate homes and roads inside the backwater area.

She said old studies show flood levels would increase in nearby areas that are outside the protection of the levee system. She also noted floodwater coursing through a spillway north of New Orleans that’s killing seafood and marine life because it’s turning brackish estuaries into freshwater. Mississippi officials have complained about that situation as well.

While water pumped from the Yazoo Backwater Area would add to the flow of water in the Mississippi River, Thomas Holden Jr., with the U.S. Army Corps of Engineers, said during a presentation in Vicksburg Wednesday the additional water would have an impact, but it would “be a very small impact.”

Holden said the additional water would have added about a tenth of a foot to current river levels measured at Vicksburg.

That’s a hard calculus for many residents of the flooded region to understand, though, with hundreds of homes flooded and some farmers unable to plant a single acre this year. Mississippi Levee Board Chief Engineer Peter Nimrod is a pump supporter who calls Hyde-Smith’s request a “brilliant idea,” saying it would provide at least a little relief. He said farmers have been proposing to use their small farm pumps to try to drain water, even though that’s an impractical solution.

“People have been talking about pumps since day one,” Nimrod said.

Tim Reeves with The Vicksburg Post contributed to this report.