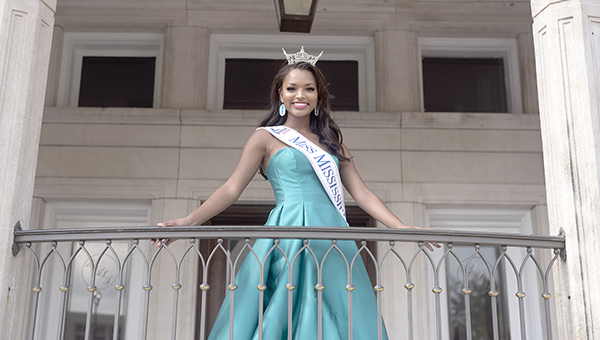 It takes a special young woman to be crowned Miss Mississippi, and Asya Branch has served her state well.

Not only has she traveled the state promoting her social impact initiative, Empowering Children of Incarcerated Parents, the 2018 Miss Mississippi has met with dignitaries, made countless visits to the Blair E. Batson Children’s Hospital and served as a role model to young women.

Next Saturday, this will all come to a close for Branch, but not without memories for a lifetime.

“Now that my reign is coming to an end, I am saddened at how fast a year flies by, but I look back with a grateful heart. I am filled with so much gratitude. This year has been so much more than I could have ever imagined,” Branch said.

With a year filled with exciting and one-of-a-kind experiences, she admitted it would be difficult to recall everything she has done.

“I have done so much this year that it is so hard for me to remember it all, but I have done a ton of singing and speaking. I have also been able to speak to people of all ages about my social impact initiative, my life story; how I’ve gotten to where I am, what keeps me grounded and my perspective on life,” she said, adding she has enjoyed sharing herself with the people of Mississippi.

“That was a very rare experience and opportunity, and I’m so grateful to Gov. Bryant for inviting me to attend,” Branch said.

Other highlights included competing in the Miss America Pageant and her visits to the children’s hospital.

“I have thoroughly enjoyed my monthly visits to Batson Children’s Hospital, and I will miss it tremendously. I made so many friends and have so many memories that I will cherish forever. My heart is always so full when I leave the hospital,” she said.

And of course who would not remember being a contestant vying for the national title.

“Competing at Miss America was a dream come true. The competition phases may have been different from previous years, but it was such an honor to be able to walk across the Miss America stage at Boardwalk Hall. I had so much fun with all the contestants. We grew so close throughout that competition week. It was truly an experience that I will never forget,” she said.

During the Miss America Pageant, Branch was named the second runner-up for the Quality of Life Scholarship.

“My goal was just to be one of the seven finalists, so I was truly overjoyed to be selected in the top three,” she said.

Branch said it had been a dream of hers since she was six to compete for the national title, and although not crowned the winner, she has learned a lot about herself.

“I learned my strengths, to stay true to myself, and to trust in the plan for my life. I know we all, as competitors, go to Miss America in hopes of winning. I had to trust that becoming Miss America was not what God had planned for my life, and I’m so grateful that He brought me back to Mississippi,” Branch said. “My biggest takeaway from being Miss Mississippi is how fulfilling it is to serve others. This is the most selfless job you could ever have and I have enjoyed serving the state of Mississippi and its people. It feels so great giving back to the state that has given me so much.”

For young women who might be considering competing for the crown, Branch said, “Do it.”

“You can only come out better whether you win or come in dead last. You learn so much about yourself and you gain so many skills that will take you very far in life,” she said.

With plans to finish her final year at the University of Mississippi, where she is studying integrated marketing communications with a specialization in public relations and a minor in business administration, she said it would be hard to pass along her dream job.

“But it keeps my spirits high knowing that I will forever be Miss Mississippi 2018,” she said.