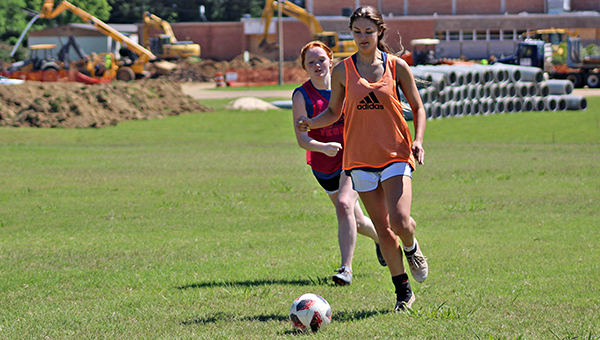 Warren Central soccer player Aryn Greer dribbles the ball past a defender during practice on Wednesday. The Lady Vikes will play in three 7-on-7 tournaments in an eight-day span beginning Thursday at East Central Community College. (Ernest Bowker/The Vicksburg Post)

In the blazing heat of June, Warren Central’s soccer teams are preparing for the chilly winter season ahead.

The Lady Vikes and Vikings will compete in a combined five 7-on-7 tournaments in a nine-day span beginning with a girls’ tournament Thursday at East Central Community College. Although a number of practices and a few scrimmage games both preceded and will follow the tournaments, the busy week represents the bulk of their work during the summer.

“We try to pack everything into June, because in July everybody is on vacation. We practice and have a couple of friendly games set up, but nothing substantial,” said Greg Head, who coaches both of Warren Central’s teams. “It’s just touching the ball and playing a lot of good teams, so it’ll help us to get quicker.”

The boys team will play at East Central on Friday and Holmes on Monday.

The Lady Vikes have about a half-dozen starters returning, but are also having to replace some key components of last season’s Region 3-6A championship team. Four seniors, all of whom signed to play college soccer, have graduated.

“We lost our big defenders last year, so we’re trying to push for somebody to step up. But we’ve never been a big offensive team either, so we still need offense,” senior defender Aryn Greer said. “We’re right now trying to focus on playing everybody everywhere and find something that can work.”

Head said a group of 10 rising seniors will keep the roster stable, but noted there were only a total of seven freshmen and sophomores on last year’s team. One goal for this summer is getting them some valuable game experience so they can mesh with the upperclassmen and be ready to take over in 2020.

“We’ve got a good core of older girls, and then a little gap in between, and a good core of younger girls. We’re trying to develop these other girls to a level where they can compete as soon as possible,” Head said. “Our numbers are down and a lot of the girls we’ve picked up have limited experience. We’re working hard on getting everybody’s skill level up so we have a little more depth.”

The 7-on-7 tournaments will also help build physical endurance. Teams play three or four games at each one, with each game scheduled for one 35- or 40-minute half. With afternoon temperatures forecast in the 90s next week, the events are as much a test of survival as soccer skill.

“Water breaks are definitely needed,” senior midfielder Maddie Watkins said with a laugh. “The games Thursday are only 35 minutes, but we’re playing three and the JV is playing a fourth. So by the time the third one comes everybody’s really tired. Practices like this, during the day, really help.”