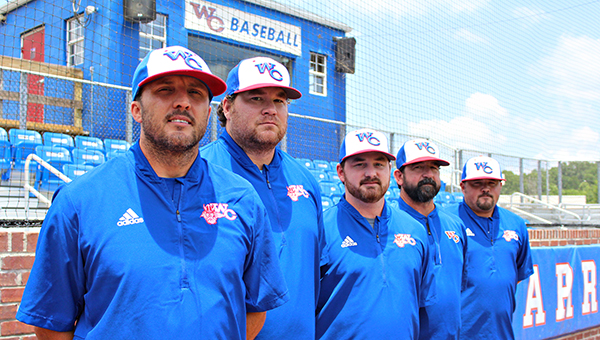 Conner Douglas sat in the first base dugout at Viking Field, looking out onto its diamond for perhaps the last time.

Douglas spent 10 years cutting the grass, dragging the dirt and working to add upgrades to Warren Central’s baseball facility. Countless hours went into shaping and molding the product on the field as well. Dozens of players learned the game under his tutelage. More than a few went on to play college baseball.

Douglas won’t be back here for a while. His contract was not renewed for the 2019-20 school year and he has since been hired as the head coach at Long Beach High School on the Coast.

“It’s bittersweet,” Douglas said. “We have a good future for these guys with what we’ve built and accomplished. Not only has the foundation been poured for the next generation of Viking baseball players, but they have great facilities. They’ve put a name on themselves as a top-quality team year in and year out. It’s kind of tough to leave a place I’ve poured so much time into. It’s been 10 years of raising money, fighting for pennies to make this place what it is. I’m very happy with what it’s become.”

What Warren Central baseball became on Douglas’ watch was one of the best programs in Mississippi. The Vikings won 142 games in his seven seasons as head coach — he was an assistant for his first three years at the school — and reached the second round of the MHSAA Class 6A playoffs in five consecutive years.

As he heads down the highway to the Coast, Douglas is adding one more line to his resumé. He’s the 2019 Vicksburg Post baseball Coach of the Year. Douglas won the award for the fifth time in six years.

“I’m very happy with it,” Douglas said of his tenure at Warren Central. “The players bought in. The parents and community got behind us. It’s a testament to what a community and a coaching staff can do when everybody pulls the rope in the same direction. I think we averaged around 20 wins a year over seven seasons as a head coach, which in 6A that’s strong. That’s probably not but a handful of teams in the state can say that.”

Douglas also credited his assistant coaches over the years for the team’s success. This year’s staff included two former head coaches, Randy Broome and Derrick DeWald, as well as Jake Parker and Craig Crews. Broome has been hired as Douglas’ successor.

“They call it a coaching fraternity, and with the staff I’ve had here over my 10 years it’s been great, but this staff has been really close,” Douglas said. “They work their tail off and do a great job developing players. It makes my job easy. All I have to do is show up and let them know what we want to accomplish each day and they got after it and did it. The reason why we’re successful is because of great assistant coaches. There will be no lost contact with these guys.”

This year’s team finished 20-11 — the third time in four years the Vikings have surpassed the 20-win mark — and beat Tupelo in the first round of the playoffs before being eliminated by eventual Class 6A champion DeSoto Central.

The Vikings were ranked in the top five in Class 6A by several outlets early in the year, but a couple of key injuries and close losses contributed to a late slump.

Although only shortstop Vantrel Reed was named to the Class 6A All-State team, Douglas said eight seniors were offered either scholarships or an opportunity to walk on at college baseball programs.

As for the players coming back next season, Douglas said he hopes to see them again. Warren Central has played in the Battle at the Beach spring break tournament the past few years, and is scheduled to do so again in 2020. One of the host schools for the tournament is Long Beach.
The schedule for next year’s tournament hasn’t been set yet, but Douglas said he planned to use whatever pull he has to make one matchup happen.

“I’ll be one of the host teams at the Battle at the Beach, and we’re going to try to schedule the game,” he said. “The players immediately, when I told them I was going to Long Beach, their reaction was, ‘Coach, we love you and there better be a Long Beach-Warren Central game on the Coast.’ It’ll be fun playing these guys in the future.”