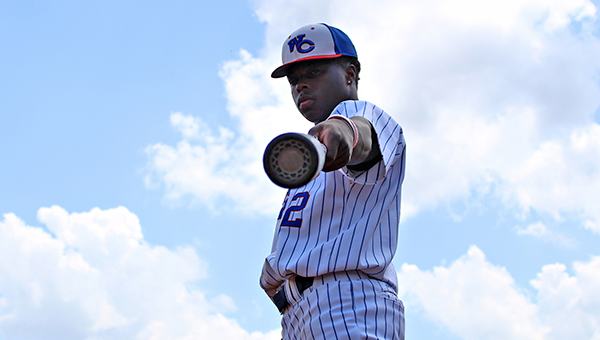 Warren Central’s Vantrel Reed is the 2019 Vicksburg Post baseball Player of the Year. Reed, a senior shortstop and pitcher, hit .414 with 10 doubles and a team-high 25 RBIs. (Ernest Bowker/The Vicksburg Post)

In 2018, Vantrel Reed was good. He felt like he could be better.

The Warren Central shortstop put in some extra time in the batting cage last offseason to change his approach at the plate and fix some holes in his game.

The senior raised his batting average 20 points. He cut down on his strikeouts and errors. The one thing that stayed the same was his status as the best all-around baseball player in Warren County.

Reed hit .414 this season and led Warren County in hits (36), RBIs (25), doubles (10) and runs scored (30). He was also one of Warren Central’s best pitchers, and for the second year in a row is The Vicksburg Post’s baseball Player of the Year.

Reed is the ninth consecutive Warren Central player to win the award, and the fifth two-time winner in its 25-year history. He’s the first player to win it in back-to-back years since St. Aloysius’ Stephen Evans in 2009 and 2010.

“It feels good,” Reed said. “This has probably been my best year, because I feel at the plate I had an approach every time I went up there and I took every game serious because I knew it was the last of my high school career and I couldn’t take it for granted.”

Reed said a more aggressive approach at the plate helped him excel this season. He struck out only seven times in 109 at-bats. In 2018, he struck out 22 times in 117 at-bats. Some of his stats dipped slightly from last season — most notably he had five fewer doubles — but he was still well ahead of his peers in most categories.

“Last year I struck out 20-some times and this year I only struck out seven. I tried to be more aggressive this year, but last year I was missing pitches too much and making errors. I had to stay calm and play the game right, and I knew it would all be good,” Reed said. “It’s something that clicked during the offseason grind. It’s the work I put in, so during a game I know I’m going to attack and do what I did in the offseason.”

Reed anchored the Vikings’ lineup all season and finished on a seven-game hitting streak. His contributions to their success went well beyond what he did at the plate, however.

He only made four errors in 42 chances over the last 17 games of the season, and once again was an ace pitcher. He finished 4-2 on the mound, with a 3.23 ERA and 54 strikeouts in 39 innings. He allowed two runs or less in six of his nine starts.

“He’s been one of the best, if not the best, all-around players that I’ve ever coached,” outgoing Warren Central coach Conner Douglas said. “He can do it all. And he was never going to ask to do something. He did what you asked him to do, and he did it a hundred percent. He got the ball on Friday night and if you told him five minutes before the game or five days before, he was ready. He thrived in pressure situations.”

Reed said that keeping a level head, and being able to immediately flush mistakes, was another key to his success.

The honors and accolades have poured in for Reed. He was selected to the Mississippi Association of Coaches Class 6A All-State team, and played in the state all-star game. He’s signed with Hinds Community College.

“It’s great, because ever since you were little you always wanted to sign and go on to the next level. That’s why we play,” Reed said.

Douglas called him a rare and special player.

“It’s very rare in this day and age to get somebody who’s as mentally tough as he is good, and he was really good,” Douglas said. “It’s very rare you’re able to see players able to flush things. With Van, if he had a bad at-bat he didn’t take it to the field. If he made an error, he didn’t bring it to the plate. He was just the ultimate mentality guy that you want to coach.”