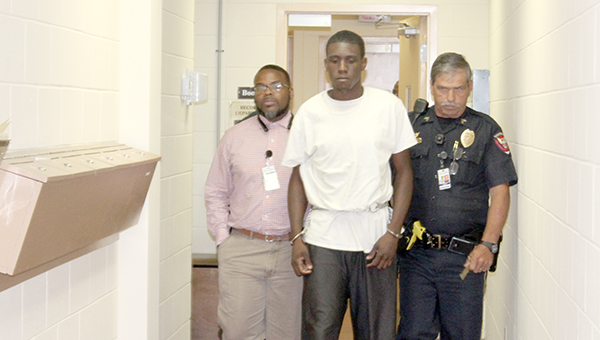 Demarcus Dequarius Smith, 21, is escorted into Municipal Court Monday afternoon for his initial court appearance. Smith is one of seven suspects tied to a gun battle on Drummond Street in May. (John Surratt | The Vicksburg Post)

Bond has been set at $200,000 for a Utica man charged with drive-by shooting and shooting into an occupied dwelling during a May 13 running gun battle on Drummond Street.

Smith’s attorney, Dennis Sweet, who accompanied him at the initial appearance, said he would seek a preliminary hearing on the charges.

Sweet asked for a low bond for Smith, telling Derivaux his client was not a flight risk and had no prior criminal record.

Smith is accused of participating in the gunfight on May 13. It involved a white car chasing a small silver pickup truck, with the occupants of both vehicles exchanging gunfire.

The truck wrecked at Drummond and Forrest streets, and its occupants fled on foot.

The car left the area at a high rate of speed. Smith, Curtis said, was an occupant in the car.

Police have arrested six other people in connection with the incident.