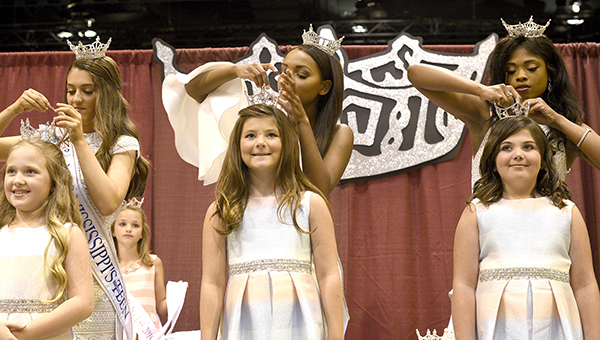 But, it is the crowning of the Magnolia Princes and Princesses that kicks off the weeklong festivities in style.

“Initially the children are nervous when they get here, but once they start practicing they get so excited,” Lisa Boleware, chairperson of the Magnolia Prince and Princess Program, said. “They also love every chance they get to visit with their candidates.

“The children are also excited to meet up with friends from years past,” she added.

Boleware said in addition to the 138 participants, she has more than 30 helpers, mostly teenagers.

For those princes and princesses who might one day be interested in competing in or working on the Miss Mississippi Pageant, the Magnolia Prince and Princess Program provides an up close look at the pageant.

For some, this marked their first year with the program. Others are veterans, returning again and again to participate.

Maui Myers, 8, who is one of the princesses for Miss Jackson Madeline Stanteen, said she was no stranger to the pageant scene.

Maggie Wardlaw, 9, is also no stranger to the pageant scene.

“My sister was in the pageant for two years, and when Madeline asked me to be one of her princesses, I thought it would be fun,” Wardlaw said.

Blake Casano, who is a princess for Miss Southern Oaks Mary-Elizabeth Killian, said she got involved with the Magnolia Prince and Princess program last year.

With so many children involved in the Magnolia Prince and Princess Program, there are many volunteers — some of whom are teenagers — who help the children out during the week.

For 14-year-old Karly Henderson, this is her second year to volunteer as a prince and princess helper.

“I like working with the princes and princesses, and it is fun to watch them dance,” she said.

Caton Blackburn, 16, and her 14-year-old sister Ali are also serving as teen helpers.

While this is their first time to volunteer with the program, the sisters are well aware of how things work. Both Caton and Ali were Magnolia Princesses when they were younger.

“Getting to work with the princesses sounded fun,” Ali Blackburn said.

The Miss Mississippi Pageant preliminary competitions will get under way Wednesday at 7 p.m. at the Vicksburg Convention Center and continue through Friday.

The final round of competition will be Saturday at 8 p.m. In the finale, the top 10 will be named and each contestant will compete again in each phase of competition, with the exception of the judges’ interview.

Tickets for all four nights of the competition are available at missmississippipageant.com/2019-miss-mississippi-pageant-tickets.

Single-night tickets are available at the pageant office at 820 South St.