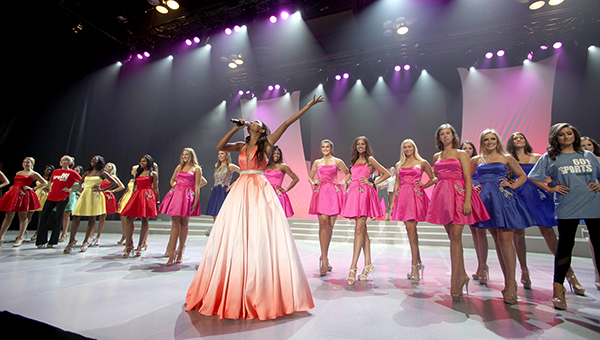 2018 Miss Mississippi Asya Branch, center, and those competing for the 2019 Miss Mississippi title go through a dress rehearsal Tuesday afternoon at the Vicksburg Convention Center. The first round of preliminaries is set for Wednesday evening. (Courtland Wells | The Vicksburg Post)

The success of the Miss Mississippi Pageant is dependent on those who serve as volunteers.

Whether serving as a hostess for the contestants, writing the script for the show or doing hair and makeup for the entertainers, these more than 100 volunteers give of their time for an event that has been hosted in Vicksburg going on 62 years.

So why do these men and women do it?

“All of us are friends and it is like a family,” Miss Mississippi Pageant volunteer Steve Butler said.

Butler has been volunteering with the pageant for close to 40 years he said.

Some of his tasks have included working back stage, picking up people from the airport and putting out chairs.

“I just do anything they need,” Butler said.

David Blackledge, who serves as the executive director of the Miss Mississippi Corporation and who is a volunteer himself, vouched for Butler and said, “If there is anything that needs to be done he (Butler) makes it happen.”

Lisa Boleware has been a Miss Mississippi volunteer since 2006.

She said she got involved shortly after she and her husband, Eddie moved to Vicksburg.

“Pat Hopson asked me if I would like to help out,” Boleware said.

Initially, Boleware said she volunteered to help with the Miss Mississippi Pageant parties, which were held following the competitions.

“I loved it because I didn’t have anything to do and this was a great way for me to meet people,” she said.

Currently, Boleware serves as the chairman of the prince and princess program, a title she has held since 2007.

“I just love all these children they are like all my little babies,” she said.

Renea Foley serves at the assistant to the producer/director and said this would be her 14th year as a volunteer with the Miss Mississippi Pageant.

Like Butler, Foley has served in many capacities throughout her tenure with the Miss Mississippi Pageant, but for the last several years, she has been working with the production.

Foley said she continues to stay involved with the Miss Mississippi Pageant because she believes in the program.

“These women are very well educated and they are passionate about their impact statements, and it is refreshing to see the next generation of leaders,” she said.

“Some of the people you see weekly and some you see only at pageant time and you’re excited to see them, Foley said,” adding they all work well together.

Jan Blackledge became involved with the Miss Mississippi Pageant when she married her husband, David.

“When I married David he was a member of the Jaycees and I became a Jaycette,” Jan Blackledge said.

(The Jaycees originally held the franchise for the state pageant.)

The couple has been married for 35 years and over the years, Jan Blackledge has volunteered in several capacities of the pageant, she said, but no job has been as important as helping her husband.

“I mostly just tried to help David and do whatever needed to be done and make it easier for him,” Jan Blackledge said.

Jan Blackledge did admit there were times when her daughters were young it was challenging to be involved, but now that they are grown, they too also serve as volunteers making it a true family affair.