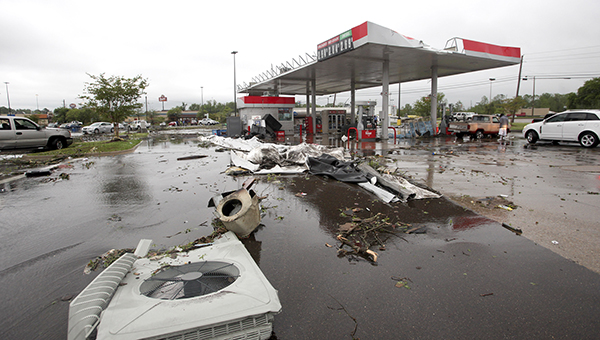 The gas station in front of Kroger on Pemberton Square Boulevard was one of the businesses heavily damaged in storms that rolled through Vicksburg and Warren County in mid-April. (Courtland Wells | The Vicksburg Post)

Mississippi’s congressional delegation sent a letter to President Trump Monday asking him to grant Gov. Phil Bryant’s request for a major federal disaster declaration in the wake of devastating storms and record flooding across the state that occurred April 13-14.

Mayor George Flaggs Jr. said the letter is a “follow through to encourage the president to declare Warren County and Vicksburg a disaster area so we can be individually reimbursed in the process.

“I feel confident they’re going to declare it; it’s just sometimes it runs two months behind,” he added.

“I’m glad they did that, because we do need a declaration,” Warren County Emergency Management Director John Elfer said of the letter.

He said the storm damage from the tornadoes did not meet the threshold for individual assistance, adding, “I don’t know that we got the PA (public assistance) but I think we will.”

Neither Flaggs nor Elfer had a total amount of damage from the April tornadoes that hit the area. Elfer said it was too early to get damage estimates on the flooding, but added, “It will be in the millions.”

The request comes after the president approved a separate emergency declaration in April for heavy rainfall, severe weather, flooding and tornadoes that occurred in February and March.

The president’s approval of the disaster declaration will be vital as the state continues to recover from ongoing flooding in the Mississippi Delta and other severe weather events over the past six months, a release from the delegation indicated.

Mississippi was ravaged by tornadoes over a two-day period as lines of severe weather preceding a frontal system crossed the state April 13-14.

The first, which was reported to have started at 5:04 p.m., cut a 4.35-mile path that started near Walmart and cut across Pemberton Square before ending past Indiana Avenue near Mississippi 27.

Winds topped out at 120 mph and the tornado had a width of more than four football fields. It reportedly ended around 5:15 p.m. and was responsible for the severe damages to businesses on Pemberton Square Boulevard.

The second reported tornado began at 5:08 p.m. at the intersection of Bowmar Avenue and Jeanette Street.

The tornado’s winds hit 115 mph, was reported to have been 175 yards wide, and damaged an area nearly 3 miles in length.

At its peak, the tornado reached winds of 115 mph.

The maximum width of the third tornado appeared to have been 700 yards, according to the National Weather Service.

The third twister was responsible for damage to trees and a statue in the Vicksburg National Military Park and damaged trees and utility poles in the county.