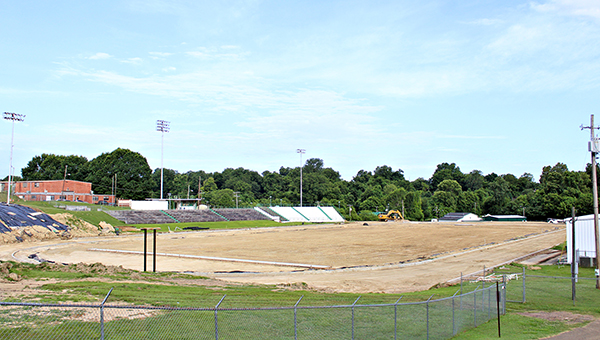 One day in May, Vicksburg High football coach Tim Hughes arrived at his team’s fieldhouse to find an unexpected sight.

He knew the construction crews that were renovating the baseball field were on their way. He didn’t expect them to encroach as far onto the adjacent football practice field as they did.

“It’s not even half a practice field. It was a shock when it happened. It was a little more than we originally discussed,” Hughes said. “They had to move everything out about 50 feet because of some issues with the retaining wall, and that took them farther out into our practice field.”

As Hughes is quick to point out, however, stopping was not an option for either the construction or his team, so they’ve done their best to adjust during the summer workout period.

In a daily ballet of coordinated chaos, the Gators’ coaches are ferrying players via bus to the nearby City Park softball fields for conditioning drills while other groups eat breakfast at the fieldhouse or do whatever work they can on the miniaturized practice field.

“It’s a lot of moving parts,” Hughes said. “We’re motivated to get better. It’s a ‘What’s next?’ deal, and we’re going to adapt and overcome. We’re coordinating. It’s tedious. It’s all worth it.”

Vicksburg’s entire offseason program has been shaped by the renovation projects that are under way at many facilities in the Vicksburg Warren School District. Vicksburg Junior High also has some work being done, so a lot of the program’s seventh- and eighth-grade players are working with the varsity team.

Hughes said while that makes for some cramped quarters, it has benefits in exposing the younger players to a more advanced way of doing things.

“I think the more we can do to create our culture and the more they learn it, they get to see the varsity kids, they learn a lot. They’re getting developed all around. That benefits us,” Hughes said.

On the field, the Gators are split up into several groups during their daily four-hour morning practice sessions. On the reduced practice field, players work with equipment designed for short-burst drills, such as blocking sleds, that don’t require a lot of space to operate, or they lift weights in the fieldhouse.

Running and 7-on-7 drills are done on the City Park softball fields, which are located only a few hundred yards away as the crow flies but still require a bus trip to reach. Players cannot simply walk over there because of safety and logistical concerns. Because of the construction, Drummond Street in front of the high school is reduced to one lane and Stadium Drive is frequently blocked by equipment.

The Gators are about six weeks away from the start of preseason practice, two months from the season opener, and three months from their scheduled home opener. The construction at Memorial Stadium is a few weeks behind schedule because of some drainage problems discovered after work began.

When it’s all done, Memorial Stadium will have a new artificial turf field and a running track ringing it. Another phase of construction scheduled for 2020 will focus on the stands and stadium itself.

For now, Hughes is keeping an eye on the work being done by two teams — the construction crews swarming the area and his Gators on the practice field. In the back of his mind he’s also got his own timeline. The home opener is Sept. 13 against Benton (La.), in Week 4 of the season. That’s followed by an open date and another home game vs. Provine on Sept. 27.

Two of the first three games are across town at Warren Central — the annual rivalry game against the Vikings on Sept. 6, and the Red Carpet Bowl against Madison Central on Aug. 23.

Hughes said the layout of the schedule itself was a contingency plan.

“There’s a reason our first home game isn’t until the fourth week of the season,” he said with a chuckle. “You never know what’s going to happen.”