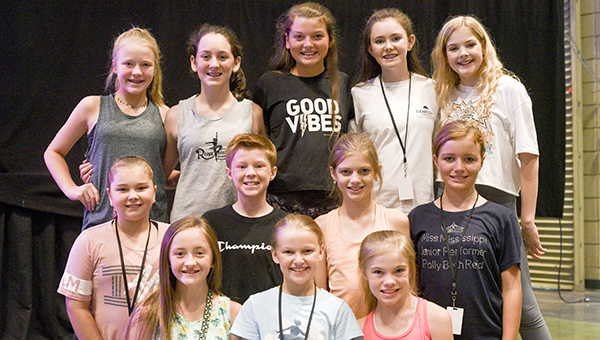 The group of junior performers taking part in the Miss Mississippi Pageant production pose for a photograph during a break in rehearsals Tuesday at the Vicksburg Convention Center. (Courtland Wells | The Vicksburg Post)

The feedback was heard.

This year the Miss Mississippi Pageant is returning dancers and entertainers to the stage for its production.

And with the return, a new element has been added — junior performers.

Comprised of 12 children ranging in ages from 10 to 13, these performers will be included in the opening number of the show and the finale, as well as being featured in their own production number, executive producer for the Miss Mississippi Pageant production Jaynie Fedell said.

“We felt like adding young performers would allow them an opportunity to grow in the business of entertainment and also transition from doing the prince and princess program,” Fedell said.

Auditions for young performers were open only to children who previously served as a Magnolia Prince or Princess in the Miss Mississippi Pageant those who were picked had talents that varied from singing to acting to dancing.

“This has been a really great opportunity for me to show people what I can do, and I am really happy to entertain people and I am excited about the show,” 13-year-old Nataleigh Nix said.

Serving as the coordinator of the young performers is Fedell’s daughter.

“I chose Vera Ann because she knows how to sing and dance and act, so she was the perfect choice for the job,” Fedell said.

“Having this job has kind of been like being a camp counselor that has to have multiple talents for everyone to be able to have an understanding of direction since the children’s abilities vary,” Vera Ann Fedell said.

A volunteer with the Miss Mississippi Pageant organization for seven years, Vera Ann Fedell said the children as a whole were pretty well-behaved, and she has enjoyed working with them even though the job has been more demanding than those she held in the past.

“Instead of just running around getting stuff or scrolling a screen, I have had to have a lot of leadership and direction of what is happening in the show because these kids are relying on me,” she said.

Eleven-year-old Lilly Crump said she feels honored to be part of the production.

“It feels like you are the star of the show,” Crump said, adding as a young performer she has the opportunity to be on the stage more often than when she was a Magnolia Princess.

Both young performers admitted they had performance jitters.

The Miss Mississippi Pageant preliminary competitions will resume at 7 p.m. Thursday and continue through Friday at the Vicksburg Convention Center. The final round of competition will be held at 8 p.m. Saturday and one candidate will be crowned the winner. For tickets, call 601-638-6746.