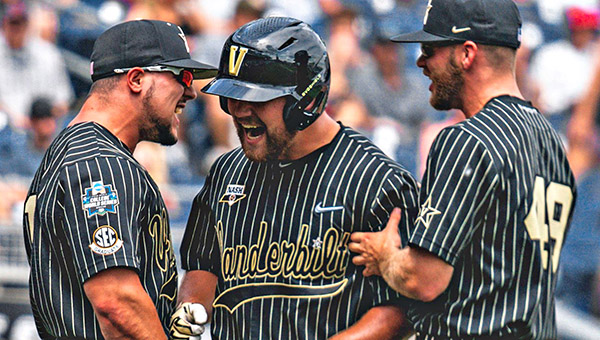 OMAHA, Neb. (AP) — After being constantly reminded for more than a week about his no-hitter in the NCAA super regionals, Kumar Rocker found himself on the mound for the first time at the College World Series.

Vanderbilt’s 6-foot-4, 255-pound freshman star never let the pressure get to him, turning in another strong start and getting plenty of support from Stephen Scott’s two home runs and four RBIs in a 6-3 victory over Mississippi State on Wednesday.

“That first inning I was a little bit zoned out,” Rocker said. “I had to take my time and get my feet under me and just started cruising. It took me a little bit to do that.”

No. 2 national seed Vanderbilt (56-11) gained the inside track to the best-of-three finals next week. They need a victory Friday or Saturday to advance.

They’ll face either Mississippi State or Louisville, who play an elimination game Thursday night.
It was the Commodores’ second win of the season over Mississippi State. The teams didn’t meet in the regular season; Vandy won 1-0 in the SEC Tournament.

Rocker, who struck out 19 against Duke on June 8 in the first no-hitter of the 20-year super-regional era, held the No. 6 Bulldogs (52-14) scoreless until Rowdey Jordan’s two-out RBI single in the sixth inning. That ended Rocker’s 19 2/3-inning shutout streak.

Rocker (11-5) used his fastball and a flummoxing breaking pitch to limit the Bulldogs to five hits. He walked one, hit a batter and struck out six before Patrick Raby took over to start the seventh. Rocker won his fifth straight start and is 9-1 over his last 10.

“He was able to command two pitches for strikes. He’s got a fastball that’s mid-90s and a 12-6 slider that works,” said the Bulldogs’ Jake Mangum, the SEC’s career hits leader. “He was able to keep us off balance. He pitched really, really well. He’s a freshman. That speaks volumes of his last two starts. The future is really bright for him.”

Scott hit a solo homer in the second inning and a three-run shot in the fifth to break open the meeting of SEC rivals. It was the 13th and 14th for the 6-hole batter.

“Their whole lineup has had a really good year, and you’ve got double-digit home runs there late in their lineup with a couple guys,” Mississippi State coach Chris Lemonis said. “I thought we pitched him good at times and we left some balls over the plate, and for a good hitter, man, he took advantage of it and crushed them.”

The Bulldogs, who came from three runs down in the ninth inning to beat Auburn 5-4 on Sunday and have a nation-leading 28 come-from-behind wins, got their offense going once Rocker left.

Marshall Gilbert homered leading off the seventh against Raby and Mangum doubled and scored when Tanner Allen doubled past diving center fielder Pat DeMarco to make it 6-3.

Tyler Brown entered with two outs and runners on the corners and struck out Dustin Skelton. He limited the Bulldogs to one hit over the last two innings to earn his 16th save, the seventh that required him to get six or more outs.

“That was a tough one to swallow,” Mangum said. “We have to go home tonight and turn the page quick.”

JJ Bleday’s RBI double started a five-run fifth for Vanderbilt and knocked out MSU starter Peyton Plumlee (7-5). Trysten Barlow took over, and Ethan Paul singled and Philip Clarke walked to load the bases. That brought on Riley Self, and DeMarco tapped his first pitch for an RBI groundout before Scott launched a first-pitch slider over right field for a three-run homer and 6-0 lead.

“We went into this game confident with Kumar on the mound, and he really showed up,” Scott said. “That’s a pretty scary team top to bottom, so we were looking to give him some run support.”

One day in May, Vicksburg High football coach Tim Hughes arrived at his team’s fieldhouse to find an unexpected sight.... read more