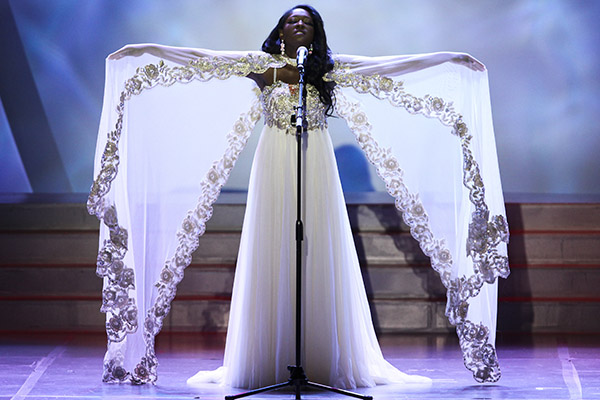 Miss Pride of the South Charity Lockridge performs during the Talent portion in the first preliminary night of the 2019 Miss Mississippi Pageant at the Vicksburg Convention Center Wednesday. (Courtland Wells/The Vicksburg Post)

With Vicksburg’s history of hosting the Miss Mississippi Competition, there is no surprise local women would be interested in competing.

While only one candidate can hold the title of Miss Vicksburg, there are open competitions that allow women who are not associated with a college or town to compete. This year the River City has three candidates vying for the crown — Miss Vicksburg Alexis Murrell, Miss Pride of the South Charity Lockridge and Miss North Central Mississippi Peyton Olivia Pierce.

Pierce, who is a 2019 graduate of Warren Central High School and plans to attend Hinds Community College in the fall to pursue a career in vet tech, and eventually attend Mississippi State University and go to veterinary school, said it was by sheer accident she decided to compete on the local level.

“Mrs. Brumfield from my church called me the night before the preliminary and asked me if I wanted to be in a pageant. I thought she just wanted me to entertain or emcee, but that was not her intentions,” Pierce said.

After learning Brumfield was asking if she wanted to compete, Pierce said, she got an evening gown, competed and wound up winning the title.

For Murrell, who is a 2014 graduate of WCHS and a 2018 graduate of MSU, competing in the competition meant she could further her efforts in getting the word out about mental health issues.

“I want to serve on a wider platform. I want to reach more people and have a lasting impact on people,” she said.

Murrell’s social impact statement is, “You ARE Equipped: Depression and Anxiety Awareness.

Murrell holds a degree in civil engineering and since graduating from college, she has been working as a hydraulic engineer with the U.S. Army Corps of Engineers.

Lockridge is a 2016 graduate of Vicksburg High School and is currently a student at Hinds and is majoring in dental assisting.

“I will be graduating in December and will be heading to Alcorn University to obtain a bachelor’s degree in health science and then plan to go to dental school,” she said.

Lockridge, who is competing in the pageant for the second year, said she came back for the experience.

“The experience I had last year was amazing. I embraced every moment. I made friends and created a sisterhood and bond with these girls, and I also had the chance to meet new people and serve people across the state,” she said.

As a native of Vicksburg and having attended Miss Mississippi Competitions since she was 6 years old, Murrell said growing up here definitely influenced her decision to compete for the title.

“I grew up having the candidates as role models growing up,” she said.

For Lockridge, growing up in Vicksburg, the home of the Miss Mississippi competition, was not a deciding factor in whether to compete.

“But once I got here and realized the importance and vitality of Vicksburg and the history it holds, it made me want to compete even more, and I am honored to say I am from a great city where we hold the pageant every year,” she said.