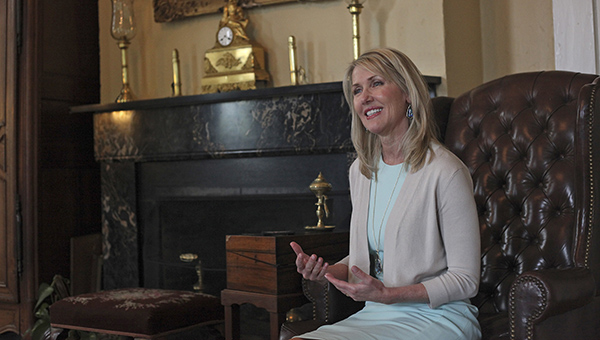 Judge Karen Hopson Hall answers questions during an interview Wednesday. Hall, a Vicksburg native who won the 1981 Miss Mississippi Pageant, is serving as a judge in this week’s competition at the Vicksburg Convention Center. (Courtland Wells/The Vicksburg Post)

The Miss Mississippi Competition not only offers more than $900,000 in in-kind scholarships to candidates, it can also serve as a stepping stone into future endeavors outside of college.

In addition to those who compete for the crown, performers in the Miss Mississippi Competition production can also take their experience and apply it to prospective goals.

Those who have benefited from the organization’s opportunities include Vicksburg native Karen Hopson Hall. Crowned Miss Mississippi in 1981, Hall is serving as one of the five judges for the 2019 Miss Mississippi Competition.

She said her experience with the competition has definitely served her well.

For the past 23 years, Hall has resided in Dallas with her husband, Reggie, and their three children.

In the 1982 Miss America Pageant, Hall placed in the top 10 and was a preliminary swimsuit winner, an honor that she ranks as one of the high moments of her life. Her victory was the fourth in a row for Miss Mississippi in the swimsuit competition.

Currently, Hall is a realtor with Coldwell Banker and is a Million Dollar Producer.

Molleigh Wallace, who is also a Vicksburg native, said the Miss Mississippi Organization allowed her to perform on the stage at an early age as a junior and senior dancer.

Wallace is a performer at Universal Studios in Florida and a former member of the Orlando Magic dance team. She has returned home this year and is one of the three principal dancers in the Miss Mississippi production.

“Being part of the Miss Mississippi Competition taught me at an early age how to audition and how to work with performers I had never met before and learn choreography from new people,” Wallace said. “And now to come back as a professional dancer is so full circle.”

Murray, who released a Contemporary Christian album last year, lives in Nashville. In addition to the release of her album, she said, she is also writing and touring.

Murray said she loves the Miss Mississippi Organization and not only did it help further her career, the organization also instilled life lessons.

“I think all of the former (Miss Mississippis) would agree with me that they learned so many lessons while competing that honestly changed their lives,” she said.