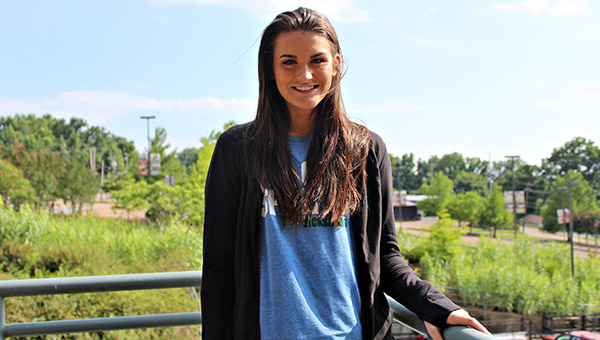 As a newcomer to a world where experience often equals success, Taylor Hughes might not be one of the favorites to win the Miss Mississippi Competition this weekend.

Nine months ago, Hughes had surgery to correct a rare condition called a Chiari malformation, which causes pressure on the brain. Doctors removed part of her skull and part of the C1 vertebra.

This week she’s been competing in the Miss Mississippi Competition as Miss Tupelo. It’s the culmination of both an unexpected detour and rise from one of the scariest moments imaginable to one of the best of her young life.

“People will ask, ‘Was it that invasive?’ And I’ll be like, ‘Well, they did take out my skull, my vertebra and part of my brain,’” the 18-year-old Hughes said with a laugh. “I don’t know how I’m better this fast. I guess if God willed it to happen, it’s going to happen.”

A Chiari malformation is a condition in which the section of the skull is too small or deformed, and thus puts pressure on the brain. The lower part of the cerebellum, or tonsils, is displaced into the upper spinal canal. More serious forms of the disease — there are five types, and Hughes had the most common one — can lead to paralysis.

Chiari malformations are a genetic disorder occurring in one in every 1,000 births, although recent research has shown that they might be more common than previously thought. Hughes was first diagnosed with the condition when she was a freshman in high school.

“It was very scary. I remember going to the hospital because I passed out on the soccer field. I missed a ball and fell straight on the concrete. I went to the hospital and they told me you definitely have a concussion, but you also have Chiari,” Hughes said. “The only reason I knew what it was, was because my cousin had it and she had a very big struggle with it and ended up with two shunts in her head. That’s exactly what I envisioned when I knew what Chiari was.”

At first, Hughes lived — thrived, even — despite her diagnosis. She became a three-sport star at Pontotoc High School, playing volleyball, soccer and football. She received an athletic scholarship to play soccer at Itawamba Community College, but football is where she gained the most attention.

Hughes — who is 6-foot-3 — played in 11 football games over two seasons for Pontotoc. A standout kicker, she converted 45 of 48 extra point attempts and 3 of 4 field goal tries in her career. She hopes to walk on with Itawamba’s football team.

Hughes’ pageant platform, officially, is the Children’s Miracle Network and spotlighting its work with rare diseases like Chiari. She said, however, that she also hopes her success in football and her moment in the spotlight this week inspires other girls to follow her lead in the world of athletics.

“I was asked to play (football). I guess the fact that it’s not seen a lot and that I can advocate for girls that want to do these things,” Hughes said of the sport’s appeal to her. “Last night at the autograph party I had two people talk to me and tell me they want to play football because of me. That means so much more to me than, ‘Your dress looks pretty.’ That has so much more weight than any other compliment you can give someone.”

At a time when her star was shining bright, however, it was about to be eclipsed by the shadow of Chiari.
Hughes had been having bad headaches — a symptom of Chiari — throughout the summer of 2018. When she finally went to see a doctor in early September, she got some shockingly bad news.

“I was not expecting to be told I had to have brain surgery. That was the last thing. I thought there would be some other treatment option before we went straight into that,” Hughes said. “But he told me that and he wanted to schedule it a week after he told me. I said I need time to mentally prepare and he gave me two weeks. That day I went to play my last volleyball game. The next day I played my last football game. Those are two of the best memories I have, because that was the last time I was ever going to play volleyball.”

The surgery involved cutting out the back of Hughes’ skull and removing part of her C1 vertebra. Doctors installed a patch where the skull was removed. Shortly after she left the hospital, Hughes had to return for another operation. The patch was loose and cerebrospinal fluid was leaking out.

“This sounds so gross, but it’s squishy back there,” Hughes said, pointing to the back of her head. “They try to put a plate on your brain and sew it in so you don’t have the CSF leak happening constantly, but it’s not the same. I can’t put my neck back all the way like I used to.”

Hughes missed a month and a half of school during her senior year and suddenly had a void in her life. Playing three sports and being involved in other activities had kept her busy for years, and now she needed something to do.

Her mother had just the thing.

Alisha Hughes was Miss Pontotoc 1996 and went on to compete in the Miss Mississippi Competition. She suggested her daughter try to follow in her footsteps.

“After my brain surgery I wasn’t sure if sports was even an option anymore, so I decided to do this,” Taylor Hughes said. “I was asked to do (Miss) Outstanding Teen last year but I was so busy with sports I couldn’t do it. So I was like, ‘Let’s give this a try.’”

Although they seem different on the surface, sports and pageants actually have a lot in common. Both are heated competitions. Both require preparation and execution to succeed. Having done plenty of media interviews as a rare female football player prepared her for the interview portion of the pageant.
For Hughes, it was a natural transition.

“It has very competitive things in it. The only difference is, I have to be very pretty for this,” she said with a laugh. “Playing soccer and football, I can walk out there with a bun on top of my head and looking very gross and it’s accepted. Here you have to look good all the time. But I don’t mind it. People think I’m very tomboyish. I’m really a girly-girl, but I can kind of hide it.”

Hughes entered the Miss Tupelo Pageant as a way to stay busy after her surgery. Even she was shocked when, on Jan. 5, she won the thing.

“I was not (expecting it). At all. As soon as they yelled my name, I was dumbfounded. I had no idea it would be me. I was like, ‘OK, I guess I’m going to Miss Mississippi,’” Hughes said. “Whenever you win a game, you can tell the outcome is coming. This was just … my face was priceless because I had absolutely no idea.”

Hughes’ side project suddenly became a much bigger deal. In the six months since her victory she has visited hospitals, led fundraisers and attended the Neuro Connect Alliance Summit in Maryland. The latter included a visit to Capitol Hill to lobby Congress to pass the 21st Century Cures Act. The act would help establish a centralized database to keep records of neurological conditions like Chiari.

In March, Hughes received the Spirit of Sport Award for Mississippi. It is awarded by the National Federation of High Schools and Mississippi High School Activities Association for deeds done off the field.

“I’m happy that I do have something to talk about that has directly affected me,” Hughes said.
Hughes is on track for a full recovery. She was cleared to resume athletic activities in February and still plans to compete for Itawamba Community College — hopefully in two sports — during the fall season. After that, she hopes to play football at Ole Miss and become the first female player in the Southeastern Conference.

As rough as football can be, given the condition of her neck and head she said she and her family are actually more concerned about how she’ll hold up on the soccer field. She said she has yet to do any physical athletic activities.

“I think football will be a lot easier than soccer. Soccer is the thing my mom is worried about, too, is heading the ball. I’m a center back, and that’s a position that I (head the ball) a lot in,” Hughes said. “We’ll see how that goes. I’ll probably start off easy and try some harder headers. There have been a lot of cases of people going back to sports after this injury.”

In the meantime, she’s got something else to win.

Hughes knows she’s a bit of a long shot to win the title of Miss Mississippi. The contestants who do win, as in sports, are often seasoned competitors with a wealth of experience and talent. Hughes might have the latter, but is well aware she lacks the former — even if she also believes it helps her to better relate to those associated with her platform and causes.

No matter what happens this weekend, her journey is certainly one everyone can appreciate.

“It’s one thing I’m worried about, being so young, but I think I can reach so many more people being young,” Hughes said. “I’ve reached so many people through sports and I’d love to reach more people through the pageant world and through this platform, too. I also can represent the fact that girls can do anything that guys can do.”