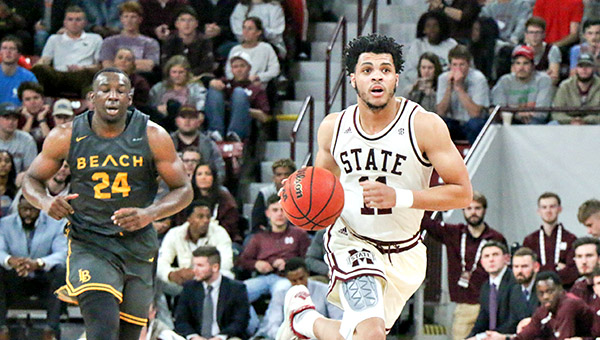 Mississippi State guard Quinndary Weatherspoon (11) was selected in the second round of the NBA Draft by the San Antonio Spurs. He’s the first Mississippi State player to get drafted since 2012. (Walter Frazier/For The Vicksburg Post)

BROOKLYN, N.Y. — After an illustrious career in Mississippi State’s Maroon and White, Quinndary Weatherspoon will spend the next part of his basketball career in black and white.

The San Antonio Spurs selected Weatherspoon with the 49th overall pick during the second round of Thursday’s NBA Draft. He is the first Mississippi State player to get drafted since Arnett Moultrie was picked by the Miami Heat late in the first round in 2012.

Weatherspoon was named first-team All-Southeastern Conference after averaging 18.5 points, 4.7 rebounds and 2.8 assists in his senior season with the Bulldogs.

Weatherspoon was the only player from Mississippi to get drafted on Thursday. Among the notable undrafted players were Weatherspoon’s MSU teammate Lamar Peters, Ole Miss senior guard Terence Davis and LSU freshman forward Naz Reid.

Reid signed a two-way contract with the Minnesota Timberwolves after the draft was completed. He will report to the NBA Summer League in Las Vegas, which begins July 5.

Davis was ranked as high as No. 40 in ESPN’s rankings of available players after impressive showings in workouts and the NBA Combine leading up to the draft, but he was not one of the 60 players selected.
Davis had reportedly talked with several teams before the draft and could sign a free agent contract this weekend.

LSU guard Tremont Waters did get drafted, in the second round by the Boston Celtics. He was the 51st selection overall.

Waters, a point guard, was a first-team All-SEC selection last season as well as the league’s Co-Defensive Player of the Year as LSU reached the NCAA Tournament’s Sweet 16 round.

In two seasons with the Tigers, Waters played in 66 games and averaged 15.6 points. He had 390 assists and 163 steals, and ranked fourth nationally in steals per game last season.