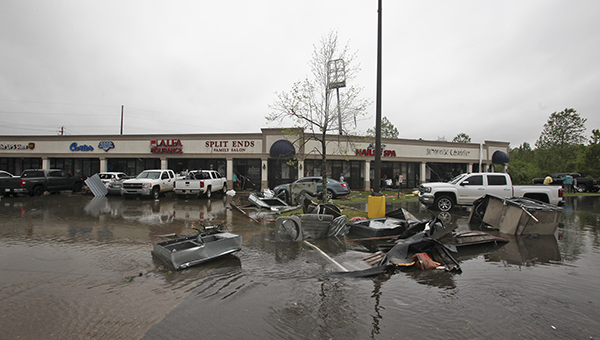 Vicksburg and Warren County will be able to get some reimbursement for cleanup from the April tornadoes that hit the area.

President Donald Trump on Thursday signed a disaster declaration for Mississippi and ordered federal assistance for state and local governments affected by severe storms, tornadoes, straight-line winds and flooding that occurred April 13 and 14.

It comes three days after Mississippi’s congressional delegation sent a letter to the president asking him to grant Gov. Phil Bryant’s request for a major federal disaster declaration in the wake of devastating storms and record flooding across the state in April. It does not cover the ongoing flooding in the Yazoo Backwater area of the Mississippi Delta.

The money will be available to state and eligible local governments and certain non-profit organizations on a cost-sharing basis for emergency work and the repair or replacement of facilities damaged by the storms, according to information from the Federal Emergency Management Agency.

Mayor George Flaggs Jr. announced the declaration at Friday’s meeting of the Board of Mayor and Aldermen.

“If I tell you elephants can fly, look in the sky,” he said as he made the announcement. “That’s because of having a relationship paid off. We’re headed in the right direction.”

Flaggs said after the board meeting, “I was confident he (Trump) would do it because of the relationship I have with the President of the United States and I also thank the delegation for their support, and because of that it was declared.”

Warren County Emergency Management Director John Elfer said the announcement “would appear that we got public assistance for the April 13 tornadoes. This doesn’t have anything to do with flooding. We’re still waiting on that.”

Elfer said the money will help pay for overtime and the cost of debris removal from the April storm, adding the ball is in FEMA’s court.

“The state has done its part. We’re waiting on the feds,” he said.

Elfer said the county’s appeal for assistance for the ongoing flooding in the Delta is under appeal.
Mississippi was ravaged by tornadoes over a two-day period as lines of severe weather preceding a frontal system crossed the state April 13-14.

Three EF-2 tornadoes hit Vicksburg and Warren County in a 30-minute span on April 13, causing widespread damage and power outages. All three tornadoes had peak winds between 115 and 120 mph.

The third tornado had the longest track, spawning near U.S. 61 North on Sherman Avenue and then ending an hour later 20.37 miles away in Yazoo County.