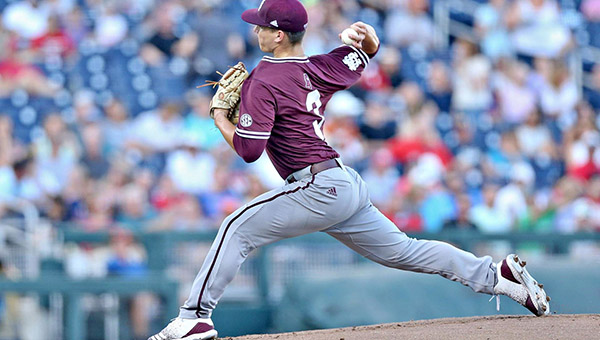 All season long — and, really, for the past two seasons — Mississippi State made comebacks and late-inning heroics its calling card.

Twenty-eight times this season, the Bulldogs had come from behind to win. In nine of those games, they scored the winning run in the eighth inning or later. Never did they blow a lead that they took into the ninth.

All of that evaporated Thursday night.

Louisville scored twice in the seventh inning, twice more in the ninth, and used the Bulldogs’ own playbook against them to win 4-3 in an elimination game at the College World Series.

“Really proud of our guys, the way they played, the way they have fought all year long. It’s just a tremendous group of kids that just would never quit,” Mississippi State coach Chris Lemonis said. “That’s kind of how you had to beat us, on the last swing, because our guys just have that never-die attitude.”

The Cardinals cut into the deficit against Jared Liebelt, who relieved Ginn to start the seventh. Liebelt issued two straight walks — both on eight-pitch at-bats — and an infield single before Drew Campbell singled, and Justin Lavey’s RBI groundout made it a one-run game.

The Cards tied it at 3 in the ninth when Jake Snider walked leading off against Cole Gordon (5-1) and took second on the reliever’s pickoff attempt in the dirt, as it bounced away from the first baseman Allen.

Danny Oriente singled into left center, and Jake Mangum came up throwing. Snider slid in headfirst ahead of Dustin Skelton’s tag attempt and the Mississippi State catcher couldn’t hold onto the ball. Oriente took second on the throw home.

Campbell then sent Gordon’s 2-2 pitch into center field, cracking a smile as he left the batter’s box. Oriente scored easily, and Campbell sprinted past second base, threw his batting helmet into the grass and prepared to be mobbed by teammates in left field.

“They (Louisville) got really big hits when they had to get big hits,” Lemonis said. “And they just kept fighting, too. I’ve been a part of that program. I know how hard they work. I know their leadership. I know the type of players and they weren’t gonna stop either.”

Lemonis and Louisville coach Dan McDonnell were teammates on the Citadel team that played in the 1990 CWS, and Lemonis was on McDonnell’s staff at Louisville from 2007-14.

The two have an agreement that, because of their close friendship, they’ll never schedule to play each other’s team in the regular season, but couldn’t avoid it in Omaha.

“It dawned upon me that if we lost today, I would have lost to one of my best friends,” McDonnell said.

While the victory sent Louisville (51-17) into another elimination game Friday against Vanderbilt (56-11) — it needed to beat the Commodores twice to advance to the CWS championship series for the first time — it was a crushing loss for Mississippi State.

The Bulldogs made a stirring run to the CWS semifinals as a plucky underdog in 2018, when a string of late-inning comebacks during the postseason inspired the “Rally Banana” phenomenon.

This year they posted the second-highest win total in school history and set team records for strikeouts by a pitching staff (718) and doubles (166), while still having a knack for pulling victory from the jaws of defeat.

This year’s College World Series appearance was the 11th in the program’s history, and third in seven seasons. It was the first time since 1997 and 1998 that the Bulldogs have gotten to Omaha two years in a row.

Mangum, the senior center fielder who leaves Starkville as one of the most decorated players in Mississippi State history, believes this two-year run is the start of a great era.

“Baseball is like life. It’s not going to go the way you want it to, but how you respond to it is going to be good, and we’ve got a lot of guys that are going to respond to this very well. The guys coming back next year, they’re going to get after it in the fall, and they’re going to be ready to go in February in front of the best fan base in the country. It’s not a debate,” Mangum said. “I want to thank Coach Lemonis. Thank you for everything. You’re going to bring the first national championship to this baseball program. You are. And it’s going to be awesome. I can’t wait to see it. You will.”

If it is the beginning of something big for Mississippi State, however, there was no disputing that it was the end of an era in at least one sense. 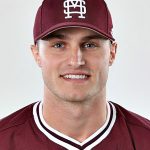 Over the course of four seasons, Mangum left an indelible stamp on the program at every level.

Mangum set the school’s single-season hits record (108) on Thursday night — his seventh-inning single, the last hit of his college career, passed the mark Adam Frazier set in 2013 — as well as the Southeastern Conference’s career record.

“First off, I’ve been very fortunate for the last four years. God has been very, very good to me for those four years, and they were the best four years of my life,” said Mangum, who was a fourth-round draft pick of the New York Mets. “Mississippi State baseball is literally a part of me. I hate it ended this way, but it is what it is. I absolutely hate it for our guys. I really do.”

More than the statistics, his coaches and teammates pointed out, was the way Mangum led the team and represented Mississippi State.

“He’s been a great help to me in running the program. Not just getting hits during games or making great plays, whatever it is, but it’s his day-to-day. He cares so much for our program,” said Lemonis, who was in his first season at Mississippi State. “I’ve never seen — he is very loved by our fans, but he gives to our fans. He never turns away an autograph. There’s days he’s stayed two hours, three hours. There was a night when he set the SEC record, he stayed for four hours signing autographs. The give-back of this kid is huge. Not only is he a great player. I mean, you see that every day. But who he is is special.”