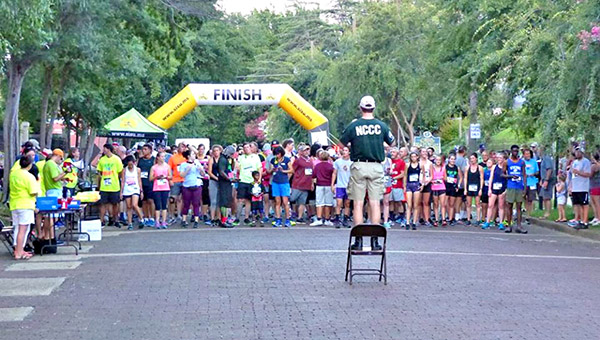 One race features a bridge. Another the Vicksburg National Military Park. One is cold and one is spooky.
With the number of running events in Vicksburg increasing, finding a unique identity for each one can be a challenge. The Southern Cultural Heritage Foundation solved the problem for its recent addition to the lineup by focusing on the time and not the venue.

The Star Spangled Night Run will celebrate its second anniversary on Saturday, June 29. Unlike other events that take place in the morning, this 5-kilometer run and race walk will begin at dusk in downtown Vicksburg. It’s one of only two 5Ks in Mississippi that is run in the evening.

“They have had some smaller ones, but it’s not a big one or one that’s been repeated over and over,” Southern Cultural Heritage Foundation director Stacey Mahoney said. “We tried to stress ‘p.m.’ in our materials. It is different, but that’s been the fun part of it.”

The Star Spangled Night Run will begin at 8 p.m. — sunset on Saturday is 8:14 p.m. — and will play up its theme as both a nighttime event and a lighthearted party. Among the goodies included in the race packet given to each runner and walker is a “glow item” such as a glow stick or face paint, and a colorful T-shirt.

“It’s definitely geared more to a party and fun, but it is a 5K and we have some serious runners and walkers as well,” Mahoney said.

Approximately 200 people participated in last year’s inaugural event, a number Mahoney was pleased with. She said this year’s early registration numbers were “neck and neck” with last year, which showed the event has staying power.

“We thought last year that it’s the first time and we’ve got to give it a chance. It met expectations,” Mahoney said.

The entry fee for the Star Spangled Night Run is $35 for adults, and $20 for children 12 and under. Online registration is open until Friday through the SCHF’s web site, southernculture.org. In-person registration and packet pickup is available at the Southern Cultural Heritage Center, 1302 Adams St., from 10 a.m. to 5 p.m. Friday and again from 6:30 to 7:30 p.m. on June 29.

Registration forms are also available at the SCHF, 601 Sports, or online at southernculture.org.

STAR SPANGLED NIGHT RUN
The Southern Cultural Heritage Foundation will host the Star Spangled Night Run, a 5K run and race walk in downtown Vicksburg, on Saturday, June 29.
The race will begin at 8 p.m. at the Southern Culutral Heritage Center at 1302 Adams St. The entry fee for the race is $35 for adults, 20 for children, and $120 for corporate or civic club teams of 3-5 members.
Entry forms are available online at southernculture.org/events or at the SCHF business office and 601 Sports. For more information, call 601-631-2997 or email info@southernculture.org.