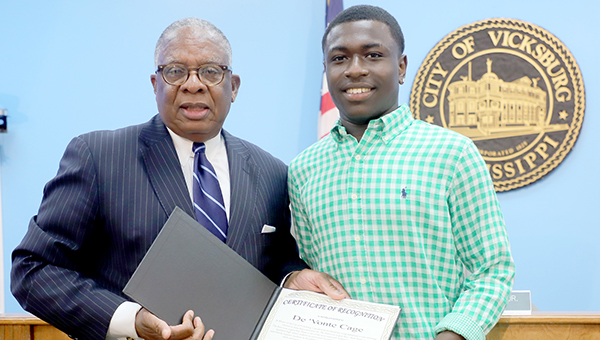 Vicksburg High School’s De’Vonte Cage was recently honored by Mayor George Flaggs Jr., North Ward Alderman Michael Mayfield and South Ward Alderman Alex Monsour for his accomplishments during this year’s Boys State. Here, Flaggs presents Cage with a certificate of recognition during the Board of Mayor and Aldermen meeting on June 17. (Larry Walker | City of Vicksburg)

Football is a sport that many Mississippians enjoy. Citizens tend to welcome players into their hearts and when the team wins, everyone wins. This has been the case for many years both on and off of the field and as a result these athletes are added to a list of hometown heroes.

This year Vicksburg High School’s De’Vonte Cage of has been added to that ever-growing list for his leadership and academic skills. Cage, an upcoming senior at VHS, was recently elected as state representative for Boys State, a summer leadership and citizenship program.

All of his life had been spent preparing him for that moment and he appreciates the opportunity he was given.

Cage learned a number of great things while at Boys State.

“We learned about some pretty cool stuff,” Cage said. “We talked about leadership and the government and learned some stuff about both that I’d never thought of.”

Cage has also been dedicated to football for the majority of his life but because of his prioritizing skills he has been deemed a great leader.

For many student athletes it is difficult to decide which extracurricular activities get more attention but Cage has everything laid out.

“Balancing classes and the sport haven’t been too hard because it’s school first and then football,” said Cage, who plays wide receiver and defensive back for Vicksburg High.

Through hard work on and off the field, Cage was selected to attend the Boys State camp offered at the University of Mississippi.

At the camp was given an opportunity to campaign for a leading position of Boys State. The position he selected was State Representative of Mississippi’s Boys State organization.

His inspiration to do so came from a family tradition.

“I feel really good about winning the position,” Cage said. “Campaigning was hard, but I won. My grandfather, who served in the Army, did it and so did his father. They both went to Boys State. My grandfather ran for governor of Boys State and he got it so I did the same.”

Today, Cage is quickly approaching his senior year of high school but he knows that he is destined for greatness.

“Whatever you do, your goals are reachable,” he said. “Don’t ever say, ‘No you can’t do it.’ Keep striving for greatness.”