The Vicksburg Post, Vicksburg Living judged among the best in Mississippi 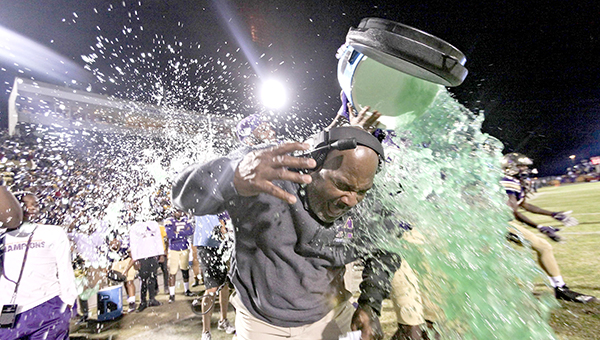 Not only was this photograph of Alcorn State head football coach Fred McNair being doused after the Braves won the SWAC Championship in December a great photograph for those who cheer for the Braves, but it also proved to be the top sports action photograph of the year in Mississippi. (Courtland Wells | The Vicksburg Post)

Each year, Mississippi newspapers and magazines are critiqued and judged, with winners announced during the Mississippi Press Association’s annual summer convention.

This year, The Vicksburg Post and Vicksburg Living were named among the best products in Mississippi during the awards ceremony in Biloxi Saturday. The newspaper and magazine won a total of 21 awards in categories ranging from writing and photography to design. Eight of those awards were first place honors.

The Vicksburg Post finished second in the general excellence category, while Vicksburg Living was named the top magazine periodical.

“We have a great team,” said Catherine Boone, president and publisher of Vicksburg Newsmedia, LLC. “Our staff takes pride in telling the stories of people in Vicksburg and Warren County, and it is humbling to see their good work recognized by others in the industry. Vicksburg Living being named the best magazine among all daily newspapers and The Vicksburg Post being named one of the two best dailies in Mississippi is especially gratifying.”

Bowker also earned a third place award in Best Magazine Story for an article he wrote in Vicksburg Living.

“This was a thoroughly enjoyable read,” the judges wrote in their comments. “By the end, I felt like I knew the subjects. This was less a sports story and more a relationship story with sports as the anchor. Very nice job in a field full of well-written features.”

“John Surratt and Brandon O’Connor did a superb job of explaining the history of, the need for and the advantages of a new sports complex in Vicksburg,” the judges said.

O’Connor also earned a first place award for his series of articles breaking down the details of the school bond that voters approved last year.

“What great timing,” the judges said. “These shots are not always easy to get even when you know they are coming.”

The Vicksburg Post’s Terri Cowart Frazier, who takes the lead each time in planning content for Vicksburg Living, along with Wells, received a second place award for Best Magazine Story. Frazier, along with former Post editor Rob Sigler, earned a third place award in the Best Lifestyles Page or Section category.

Sigler also earned a second place award in Best General Interest Column, and teamed up with Jan Griffey, the Post’s former general manager, for a third place award in the Best Editorial Page or Section category.