412th looks to the community for support, partnerships 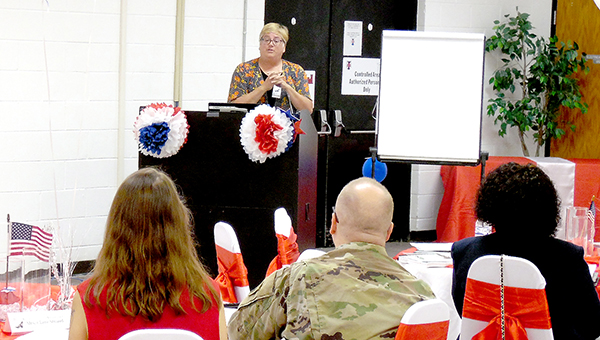 Representatives for community organizations, volunteers and members of the 412th Theater Engineer Command at 412th headquarters recently met to discuss improving communication and support between the command and the community.

The three-day workshop program also recognized volunteers who have provided support services to the unit.

“The purpose of this event is to connect the soldiers, the volunteers and families to community outreach,” said Belinda Parker, director of family programs for the 412th. “What we’re doing is bridging the gap between the army reserves and the community. We’re reaching out to say ‘let’s talk how can we improve services. How can we engage our community to be aware there are soldiers in their area.’ We want the community to know that we’re here.

“Because the Army Reserve is distributed (in different locations), the people don’t live on the bases. Having community support and supporting the community is critical to a soldier who doesn’t have an installation to go to for help for anything; the local community serves that purpose.”

Besides helping families, that support includes hiring soldiers and veterans.

Those programs could be called on to help soldiers’ families at a moment’s notice.

The 412th, Parker said, is a ready force unit, meaning soldiers can be called on at a moment’s notice to deploy to crisis areas.

“That deployment impacts children, especially in families with “dual status” parents, where both parents are in service and deployed.

“Children are taken from a school system to live with another relative, so teachers in the school system need to know that because the child’s behavior in school may be affected by the fact that their parents are deployed.”

Making that connection between the soldiers, their families, and the community’s support is key, said Jo Dempsey, division chief of training doctrine and readiness programs, “Because the community is what supports and helps take care of those military families.

“You want a ready and resilient family so the soldier doesn’t have to concentrate on the family and can do their work.”

And as the Army loses resources, she said, “We have to look out to the community for some of that support. Letting those families know that you’re there; that you support them.”

“The general public loves our military, and when you have geographical dispersion, which is the nature of our Reserve and National Guard components, it causes a little bit of a disconnect for those soldiers and their families from the military communities, which means we rely more on our public. When the military and their families feel supported by the community, it’s a morale boost.”