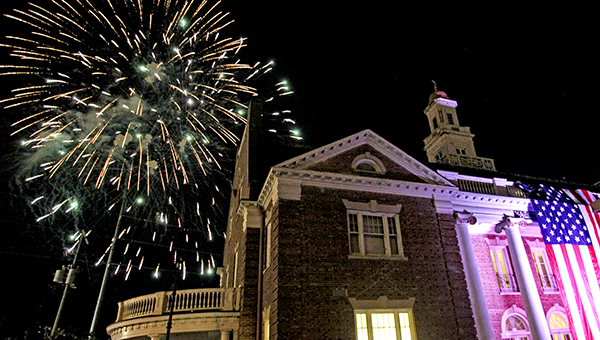 Fireworks explode above the Old Depot Museum during the 2018 Fourth of July celebration in downtown Vicksburg. (Courtland Wells | The Vicksburg Post)

Get ready to be wowed.

The annual Fourth of July fireworks show will once again light up the skies over Vicksburg’s downtown, with fireworks launched from a barge.

For 45 minutes, spectators will have the opportunity to enjoy what organizers say is the longest running fireworks show in Mississippi.

“This is one of the biggest community gatherings we have,” Mayor George Flaggs Jr. said. “We average about 10,000 people, and I expect about 12,000 this year, because of the downtown area and the excitement of Vicksburg. I think people are more motivated about the downtown area than ever before.”

Prior to next Thursday’s show, Dr. Zarr’s Amazing Funk Monsters will perform live on a stage set up in front of the Old Depot Museum, 1010 Levee St. A favorite band of locals, the group will play 1980’s style rock and roll beginning at 7 p.m.

Hopkins and her staff also plan to distribute glow sticks and necklaces to the crowd.

The fireworks show will begin at 9 p.m., with the best viewing available along Washington Street, between Jackson and Grove Streets. The fireworks will be shot from behind the museum.

Flaggs encouraged everyone to come out to celebrate the national holiday.

“Bring your lawn chairs, bring your coolers or anything you need to spend an evening celebrating the Fourth of July in Vicksburg like never before,” he said. “From babies in strollers, to the oldest in the community, this is the most family-friendly event we have in the downtown area. It is going to be a great fireworks show, a great lineup of entertainment and it should be a great weekend in Vicksburg.”