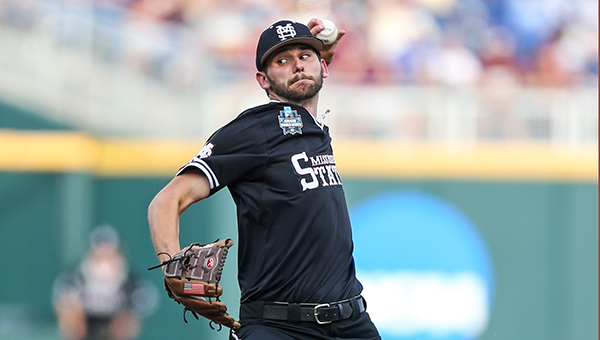 Ethan Small pitches for Mississippi State in the College World Series earlier this month. Small was a first-round draft choice of the Milwaukee Brewers and signed with them on Tuesday. On Wednesday, he was named the National Pitcher of the Year by the American Baseball Coaches Association. (Kelly Donoho/Mississippi State Athletics)

The Mississippi State pitcher on Wednesday won the American Baseball Coaches Association’s Division I National Pitcher of the Year award.

It is the second national pitcher of the year Small earned following his junior campaign. The left hander was also tabbed National Pitcher of the Year by the College Baseball Foundation.

Small was selected by the Milwaukee Brewers in the first round of the Major League Baseball draft, 28th overall, earlier this month. After a delay caused by Mississippi State’s run to the College World Series, he signed with the Brewers on Tuesday and was introduced with a press conference and visit to Miller Park.

Small received a $1.8 million signing bonus, according to MLB Pipeline’s Jim Callis. He will head to the Brewers’ complex in Arizona for a bit of a break before beginning his professional career at Class A Wisconsin in a few weeks.

“You work so hard for so long for something, and then it finally happens,” Small said. “It’s got me to the verge of tears, just because I’m so happy.”

Small is just the second pitcher from Mississippi State to win a national pitcher of the year award, with Chris Stratton being named the Perfect Game National Pitcher of the Year in 2012.

Small was up to the challenge each week as the No. 1 starter for the Bulldogs, posting a 10-2 record — including a 7-1 mark in Southeastern Conference play — and a 1.93 ERA. The southpaw did not allow more than three runs in a start all season and limited the opposition to two or fewer runs in 16 of 18 starts.

Small set the Mississippi State single-season record with 176 strikeouts, and finished with 318 for his career. He’s only the third player in program history to total at least 300 strikeouts in a career, along with Eric Dubose (428) and Jeff Brantley (364).

Against ranked opponents, Small posted a 6-2 record and 1.48 ERA in 10 starts, with Mississippi State owning a 7-3 record in those games. Two of those three losses came in one-run games.

With the national pitcher of the year honor, Small joined a select group of MSU players that have won a national player of the year award. He joined Ginn, Stratton, Golden Spikes Award winner Will Clark (1985), and Johnny Bench Award (national catcher of the year) winner Ed Easley (2007).

Small was a unanimous first-team All-America selection, earning the distinction from all seven of the major baseball reporting outlets.

Small joined Stratton — also a first-round pick, back in 2012 by the San Francisco Giants — as the only two SEC Pitcher of the Year winners. Small also earned first-team All-SEC honors, becoming the first MSU pitcher since Dakota Hudson in 2016 to be named All-SEC.

Stratton is currently with the Pittsburgh Pirates and in his fourth major league season.
“It was just immense joy (to get drafted), and then you’ve still got a job to go do,” Small said. “I’ll never forget my time at Mississippi State. Those people mean the world to me. I’m just so excited to be here. First time here (in Milwaukee), and I’m loving it already.”