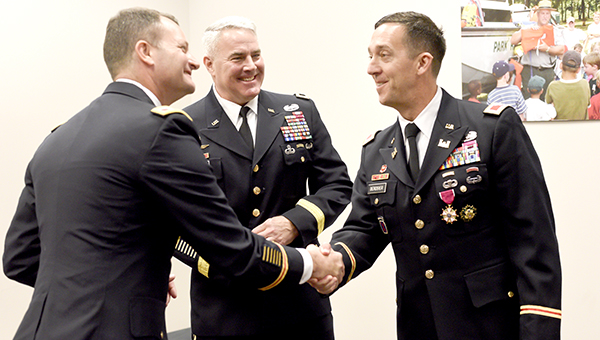 Col. Robert Hilliard assumed command of the U.S. Corps of Engineers Vicksburg District Wednesday during a change of command ceremony at the District’s offices on Clay Street.

Hilliard succeeds Col. Michael Derosier, who is leaving to be deputy chief of staff for the U.S. Africa Command, headquartered in Stuttgart, Germany.

“That mantle of passing the colors is so important, because we’re charging Rob Hilliard with carrying on the duties of command,” Maj. Gen. Richard Kaiser, Mississippi Valley Division commander, said. “We call it the burden of command for a reason, because the responsibilities that commanders hold are tremendous. The decisions that must be made are tremendous and they have such a huge impact on our country, and our stakeholders know that.”

Kaiser commended Derosier for his performance during his tenure as District commander.

“I know who he’s going to miss the most. You,” Kaiser said referring to the stakeholders on the Mississippi River and the District’s employees. “The commander sets the climate, the commander leads the pace and the way, but it’s you (the employees) who are the real heart and soul of the District. Don’t forget it. It’s our civilian nucleus that keeps it running.”

As for Hilliard, who served as deputy commander of the Corps’ Mississippi Valley Division and secretary to the Mississippi River Commission before taking command of the District, Kaiser said, “You could ask for no better colonel to come and take the reins of the Vicksburg District.”

Derosier said the District’s employees are “at top of the list of the many things I love about the Vicksburg District.

“As we battle another yet another historic flooding event, I can’t help but think that we all are something bigger than ourselves. The Vicksburg District is unquestionably a flagship district.”

Hilliard said he planned to continue to maintain and build on the District’s relationships with its stakeholders “and keep us all moving forward.”

“I have had the opportunity to visit many project sites and events and meetings, and I’ve seen both mutual admiration from both sides as well as frank discussion about what needs to happen in the future,” Hilliard said. “There’s an old saying in the Army, ‘If we can talk, we can do anything.’ So we’ll continue to talk and we’ll continue to solve problems for this area and our nation.”

Hilliard said after the meeting, the big difference between working with the Mississippi Valley Division and the District is “coming down to the District is really getting into the details of projects and working specifically with operations out on the river.

“Rather than working up and down the valley, and on foundational-type things, for me it’s going to be getting into the details and decision-making, and working with partners directly at the district level.”

A 1996 graduate of Auburn University, Hilliard and his wife Donna have two children, Gabriella, 16, and Samuel, 12.