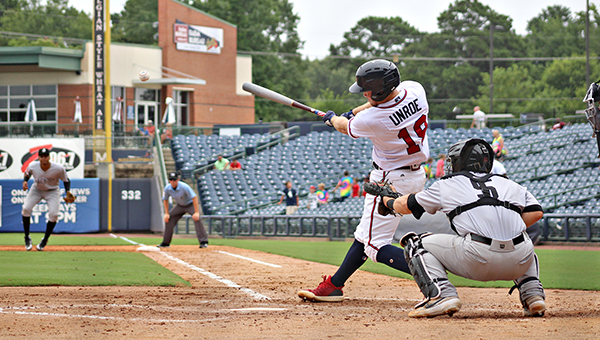 PEARL — The Mississippi Braves started their summer at Trustmark Park with a matinee and a victory that added to their winning streak.

It was the third win in a row for Mississippi, in its first home game of the second half of the Southern League season. The M-Braves and Generals were rained out Tuesday and will make that game up as part of a doubleheader on Thursday beginning at 5:35 p.m.

Wentz, the No. 9-ranked prospect in the Atlanta Braves organization, had been shaky the past month but righted things nicely on Wednesday. The left-hander had allowed four runs or more in four of his previous five starts. He only had one 1-2-3 inning against the Generals, but pitched out of all of his minor jams without giving up a run.

Wentz (4-6) left after the sixth inning having allowed three hits and four walks while striking out eight batters. He also left with a 6-0 lead thanks to a lineup that put together two big rallies after a slow start.

Jackson starter Matt Peacock (3-3) retired eight of the first 10 batters he faced — one runner was erased on a double play — and then ran into trouble in the bottom of the fourth inning.

The first five batters of the inning reached base for Mississippi, four of them via a hit. Drew Waters singled and scored the game’s first run on another single by Ryan Casteel, and then Salazar plated two more runners with another base hit to make it 3-0.

In the fifth inning, the M-Braves tacked three more runs onto their total. Cristian Pache, the No. 1 prospect in the Atlanta organization, led off with a double and scored on a two-out single by Unroe. After a walk to Casteel, Jenista hit a two-run triple to left field to make it 6-0 and blow the game open.

Unroe got another RBI in the sixth inning with a bases-loaded walk that made it 7-0. He finished the game 2-for-3 with two RBIs and two runs scored. Casteel also had two hits and scored twice, and Salazar was 2-for-4 with two RBIs.

Waters went 1-for-3 and scored a run to extend his hitting streak to 18 games. He has also reached base in 30 consecutive games and leads all of Double-A baseball with 99 hits.

The M-Braves will continue their first homestand of the second half of the season with a doubleheader Thursday at 5:35 p.m. Both games are scheduled for seven innings, and tickets are good for both games. Fans with tickets to Tuesday’s rainout can exchange them for tickets to any other game this season, except for July 4.

The series concludes Saturday at 6:05 p.m. with a postgame fireworks show.