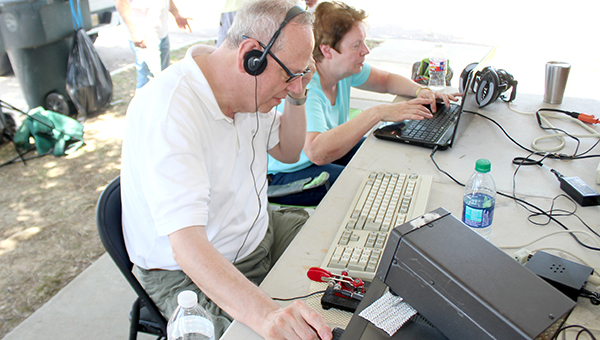 Mike Duke of Jackson, left, sends a message in Morse code while his wife Kathleen logs his contact on a computer. The couple were two of the operators working during an amateur radio field day at the Vicksburg Municipal Airport. (John Surratt | The Vicksburg Post)

For about 24 hours Saturday, the Vicksburg Municipal Airport served as an emergency operations center.

The airport’s designation was part of a field day event sponsored by the American Radio Relay League of Newington, Conn.. It was an annual event to demonstrate the readiness of amateur radio operators to respond to events like natural disasters or any incident where emergency radio communication would be required.

Eddie Pettis with the Vicksburg Amateur Radio Club said the airport was designated as an alternate emergency operations center for the field day, and operators used 3FT in their call sign when broadcasting.

Broadcasting from the airport from 1 p.m. Saturday until Sunday afternoon, the HAMs worked in rotations to communicate with as many stations as they could contact worldwide within the 24-hour-plus period as if the operators were called out for an emergency.

Tents, antenna and radios surrounded the perimeter of the airport terminal as operators used different methods — voice, Morse code, digital and satellite — to contact other operators in the U.S. and abroad.

“I like CW (Morse code),” Mike Duke of Jackson said as his wife Kathleen logged contacts on a computer. “I’ll talk, but I prefer to use CW.”

Not far from Duke, in a small grassy area in front of the terminal, Bobby Little of Utica was trying to locate a satellite to be able to bounce a radio signal to contact another operator.

Different satellites and the International Space Station, he said, have what are called digipeaters, which allow amateur radio operators to bounce signals in order to communicate with other operators in other areas of the world.

Pettis said the field day will be graded by the American Radio Relay League based on the number of stations the operators contacted and the operational mode, adding the results should be known possibly by late fall or early January.

He said plans are already under way for another field day.