Do we have what it takes to learn from this Great Flood? 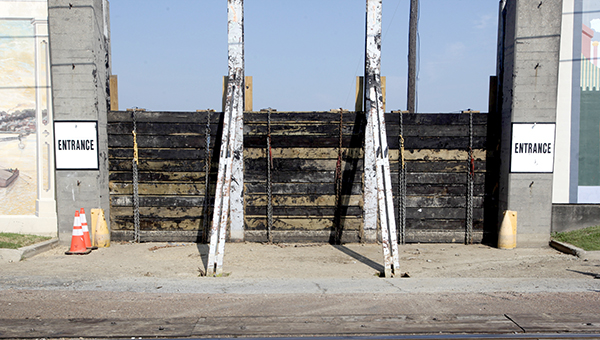 A flood wall is seen at the entrance to the riverfront in downtown Vicksburg. (Courtland Wells | The Vicksburg Post)

Maybe this is the beginning of the end of the Great Flood of 2019.

Water levels along the Mississippi River have started to drop and waters in the Yazoo Backwater Area are slowly receding.

The levels are still weeks, if not months away from reaching normal levels, but the sight of the waters inching lower is welcomed.

That said, while the waters are moving lower, the story of the 2019 flood is far from finished. The economic disaster that has been created will have ripple effects for years to come.

Infrastructure projects in areas that have been flooded for months will need to be assessed, scheduled and completed.

Homes will have to be cleaned out, repaired or rebuilt.

And, the story of the 2019 flood must include what steps were taken after the waters flowed away to ensure such a disaster is mitigated in someway.

The obvious project that must be addressed is the completion of the Flood Control Act of 1941 and the construction and placement of pumps in the backwater area. These pumps would not have drained all of the water thrown into the backwater area during this flood, but would have curtailed flooding in more than 200,000 acres.

There are other projects — both large and small — that must be discussed and enacted.

In addition to requiring those who are forced to rebuild in flooded areas to meet new standards and regulations, the city of Vicksburg should also look at its flood mitigation efforts, specifically the flood walls that have sectioned off some of Vicksburg’s riverfront.

Mayor George Flaggs Jr. has publicly called the construction of flood walls along the riverfront, that require land timbers and tar, tearing up brick sidewalks and pumps as “medieval.” He has called the labor involved as unnecessary and the technology used as antiquated. He’s right on all accounts.

Flaggs said he has raised the issue with officials at the U.S. Army Corps of Engineers, asking they evaluate the current system of flood control along the riverfront and come up with ideas of something better, easier to manage and less intrusive than the days-long work of installing those wooden barriers and tearing up sidewalks.

After the Great Flood of 1927, Congress, states and cities came together to develop plans, procedures and projects to make sure such an event never happened again. While the scope is different, a great flood has happened again, and there is no doubt Mother Nature has another planned at some point.

The test of today’s leadership is whether or not they will be as proactive, as decisive as those nearly 80 years ago.