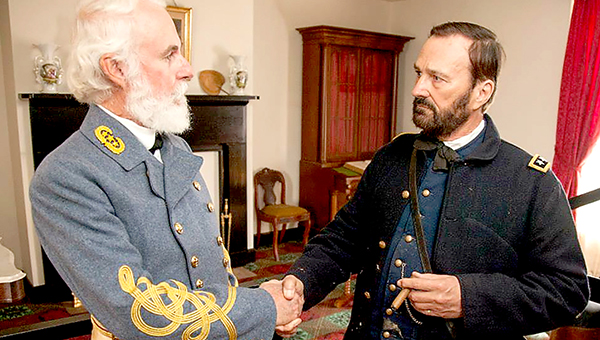 Gen. Robert E. Lee will be making an appearance in Vicksburg for the first time in history Wednesday.

The Strand Theater will host Lee and his counterpart U.S. Gen. Ulysses S. Grant in a presentation of “Appomattox: The Last 48 Hours,” at 7 p.m. Wednesday.

“This is a unique opportunity historically since Lee was never in Vicksburg,” Baer House Inn owner Patricia Rickroad said.

The Baer House Inn, along with the Strand Theatre, are co-sponsoring the two-man, one-act live presentation, which features an examination of the written communications between Lee and Grant from April 7-9, 1865.

“It literally is the last 48 hours leading up to, and including, the surrender,” Rickroad said of the performance.

Theatre goers will also learn what was happening in both armies during this exchange, and what both men were thinking at the end of the Civil War, all while the performance is presented with awareness and reverence for the soldiers of both armies.

Rickroad said Curt Fields, who is a native of Tennessee, has been portraying Grant for a number of years and is an authority on the figure. He has even been invited to West Point to give a historical presentation on the general, and has served as one of the historians on the American Queen.

“He is just phenomenal,” Rickroad said.

While she is not as familiar with Thomas Jessee, who is from Florida and portrays Lee, Rickroad said the two men travel together, often performing the re-enactment.

“They have been invited two or three years in a row to actually re-enact the surrender at Appomattox,” Rickroad said, adding the pair have also performed for a filming of the event that is set to air on one of the History channels.

“These guys have studied these historical characters from the past, and they know them inside and out,” Rickroad said. “This is a top quality show. You will be getting the best.”

The performance will last about an hour and is suitable for children, she said.

Tickets are $15 and are available at the Highway 61 Coffee House, 1101 Washington St., online at strandvicksburg.com, and at the door.

The Strand Theater is located at 717 Clay St.