Flaggs leaves VFD after more than three decades of service 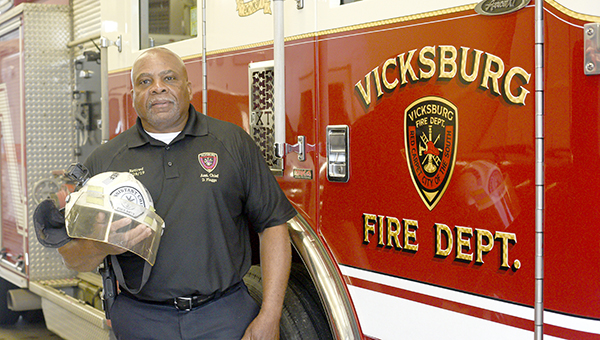 Vicksburg Fire Department assistant chief Darrell Flaggs’ more than 33 years of service with the department came to an end early Saturday morning when his final shift was over. (Courtland Wells | The Vicksburg Post)

After 33-plus years with the fire department, Flaggs is retiring and ending a career that began in January 1986.

“I’ve always had a servitude attitude before being a part of the fire department,” he said of his reason for joining the department.

He served two years’ active duty in the Army Reserve as an administrative assistant at the 412th Theater Engineer Command before entering college at Jackson State University. And the desire to serve was still there.

“I was in college and about to graduate and thinking about life going forward,” he said. “I was a business management major at Jackson State and as it was nearing time to graduate I just really couldn’t picture myself in a suit and tie in an office sitting down behind a desk for the rest of my life.”

He joined the fire department, adding, “It’s the best thing I’ve ever done.”

In the late 1980s, he said, firefighters still rode on the tailboard of the trucks.

“There was no county fire district and we covered the entire city and county; we provided fire and EMS service in our city of Vicksburg and Warren County.”

Flaggs began his career at the Central Fire Station, but spent most of his time at Stations 6 and 8. Station 8, he said, was initially on Halls Ferry Road and has since been demolished.

Station 6 was closed after the construction of Independence 3 on Berryman Road, and now houses Vicksburg Main Street.

Looking back on the calls he’s answered, Flaggs said there were “too many, too many.” But he recalled a 1993 wreck on Mississippi 27 involving a school bus and an 18-wheeler hauling gravel.

“On my days off I drive a school bus, and I constantly think about that wreck,” he said. “It was on the last day of school. The bus was leaving Beechwood to go across to Warren Central and pick up the high school students.

“The truck hit the school bus, dumped its load of gravel and tore the school bus (body) from the chassis. We had to search that entire scene; dig through the gravel to make sure everybody was accounted for.”

Flaggs called his retirement a sweet and sour moment.

“The sweetness is that I’m going to be able to retire; I’ve worked for the greatest organization in the city of Vicksburg. I have had an outstanding career, and the friendships and opportunities this job has awarded me are too many to name.

“The sour part is just leaving this profession. This job is self-rewarding. If you take away the salary, it’s a good feeling knowing you’ve served your community or you’ve served somebody who was in need; that you went to a chaotic situation and brought some calm.

One thing his retirement will allow him to do, he said, is spend time with his grandchildren, his church family and gardening.

“I’ve been driving a school bus for the last nine years,” he said. “The Vicksburg Warren School District is a great school district. I enjoy the children, and it gives me another opportunity to learn again.

“The Vicksburg Warren School District travels millions of miles every year, and the kids go on all types of field trips. They attend all types of museums, whether they’re in Louisiana, Mississippi or Alabama. I get a chance to visit all those different museums and activities. It’s kind of like learning again.”

And when he hears that siren go by his home?