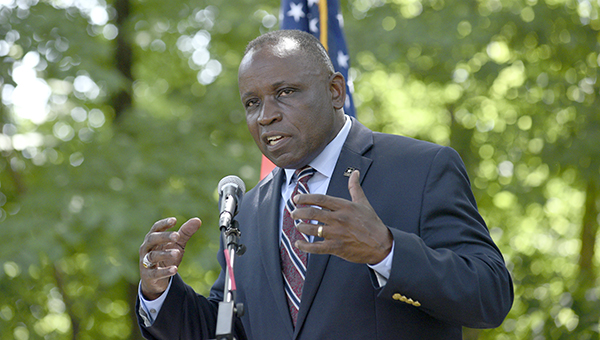 Brig. Gen. Robert Crear speaks during Tuesday’s ceremonies accepting the donation of 800 acres of the Champion Hill Battlefield to the Vicksburg National Military Park. Crear is president of the Friends of Vicksburg National Military Park and Campaign, which is planning a $3 million campaign to fund signs and other materials to properly interpret areas of the battlefield. (Courtland Wells | The Vicksburg Post)

The Friends of the Vicksburg National Military Park and Campaign is looking to raise $3 million to support improvements for the recently acquired Champion Hill Battlefield site property.

Friends president Brig. Gen. Robert Crear announced the campaign at ceremonies for the donation of 800 acres of the Champion Hill Battlefield to the National Park Service.

“The Friends has committed to raise $3 million to make the initial investment for the private sector to create visitor access and interpretation to these important sites,” Crear said, adding two people have already donated lead gifts of $250,000 each — Don Barrett; and John Nau, president and CEO of Silver Eagle Beverages and a member of the friends board.

“Preservation is the beginning,” Crear said. “Now we have to take this property and get access to it and get it properly interpreted. We want to share this. We want to tell stories of American valor, sacrifice, triumph and loss about what happened here.

“To that, we need to work faster than the National Park Service can to get this jump started,” he said.

Friends executive director Bess Averett said the organization is matching the total value of the land. She said the money will be used to help develop the initial visitor access and basic interpretation.

“Things like paved road pull-offs, wayside signs, trails systems, repair to historic structures; just things to get ready to enable tourists to get out quickly (and visit the area). Basic first step visitor use,” Averett said.

She said the work will be a series of small projects over time.

“We started on this last April planning the basic first projects and working with the park service to see the first things we could do, and also outline some opportunities to leverage that money against grants,” Averett said.

Nau said $3 million is the minimum amount necessary to provide the signs and materials needed to properly interpret areas of the battlefield.

“Without interpretation, heritage tourists just simply won’t come back,” he said. “Not just field signage, but good interpretation in the visitors center and websites.”

Heritage tourism, he said, is the fastest growing segment of the tourism industry in the U.S. and is a $171 billion business.

“We stay in hotels and motels, we eat in restaurants, we generate taxes and we go to the visitor centers’ gift shops and buy books. It is a revenue business,” Nau said. “Historic places and museums rank in the top list of activities for destinations of this group of tourists. Sixty-six percent of tourists are looking for a place like Vicksburg.”

“With this expansion, I would bet within a very short period of time, it will double, because a day trip to the park with one overnight is suddenly becoming a two to three day trip once these sites are interpreted,” Nau said. “You’ve got to invest in a business, and if you look at the park as not only an education experience but an investment opportunity for your community, this $3 million is a lot of money, but it’s going to return in a short period of time.”

Crews were called to clear a portion of Monroe Street and a sidewalk after a large section of the retaining... read more