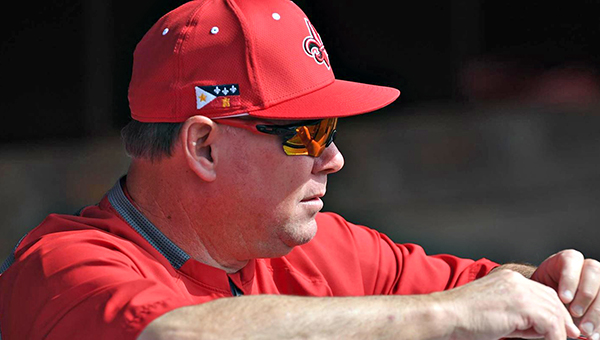 Louisiana-Lafayette baseball head coach Tony Robichaux died on Wednesday, at the age of 57. Robichaux, who coached the Ragin’ Cajuns for 25 seasons, had a heart attack on June 23. (Brad Kemp/University of Louisiana Athletics)

LAFAYETTE, La. (AP) — Louisiana-Lafayette baseball coach Tony Robichaux, who earned nearly 1,200 career wins and led the Ragin’ Cajuns to the College World Series in 2000, died on Wednesday. He was 57.

Robichaux had been in the hospital after suffering a heart attack on June 23. He had surgery that night at Lafayette General Hospital, then went to Ochsner last week and had another surgery on Sunday.

“A man of deep, unwavering faith, integrity and moral character, Tony Robichaux stood for so much more than the game he coached,” Louisiana-Lafayette director of athletics Bryan Maggard said in a statement. “I will forever be grateful for how he prioritized the development of his student-athletes as outstanding young men first, and baseball players second. Our community will forever benefit from his teachings, philosophies and leadership.”

Robichaux’s 2014 team earned the school’s first No. 1 ranking and went 58-10 while setting a school record for wins. It lost to Ole Miss in a three-game super regional series.

Six of Robichaux’s former assistant coaches have gone on to become head coaches at Division I programs. He also had 58 players selected in the Major League Baseball draft, and 29 players selected as All-Americans.

“Coach Robe was my boss but became so much more than that: mentor, friend, confidant, big brother. He and (wife) Colleen became like family when we needed it most,” Matt Deggs, a former ULL assistant who is now the head coach at Sam Houston State, told the Lafayette Daily Advertiser. “Coach Robe is the finest Christian leader of men that I have ever been blessed to work with. I learned too many life lessons from Coach Robe to even begin to list them. Great man!”