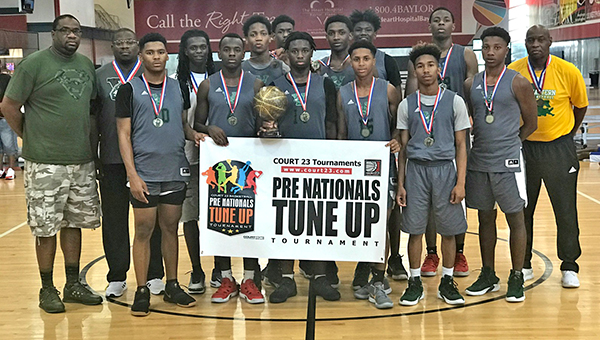 The Vicksburg High boys basketball team poses with the trophy after winning the Court 23 Pre Nationals Tune Up Tournament on Sunday in Murphy, Texas. The Gators went 4-0 in the tournament and finished their summer schedule with a 32-5 record. (Submitted to The Vicksburg Post)

When the season ended and Vicksburg High’s boys basketball team bid farewell to nine seniors — four of whom signed with junior colleges — head coach Kelvin Carter understandably had some doubts about next season.

“They’ve been erased,” Carter said with a laugh.

The reason for Carter’s change of heart is a summer season that the Gators dominated with a fresh cast. They won 32 of 37 games in June and wrapped things up by winning the Court 23 Pre Nationals Tune Up Tournament last weekend in Murphy, Texas.

“They’ve always been a good group. They would scrimmage the seniors last year and beat them. You just never saw them all on the floor at the same time. Now I’ve seen them battle tested,” Carter said.

With those players getting the bulk of the minutes, only a handful of underclassmen saw significant playing time. It wasn’t that they lacked talent, they just hadn’t had a chance to prove themselves.

That’s what this summer was for, and the new group of Gators delivered. They beat perennial Mississippi powers like Provine and Raymond, as well as two Texas AAU teams at the Court 23 Tournament. Carter said what was most impressive was the way the team played together.

“These guys have played with so much passion, heart and cohesiveness. I haven’t seen it around here since 2012,” Carter said, referring to a group of sophomores that eventually reached the Class 5A championship game in 2014. “You don’t have one stud or one featured player. Any given night, somebody might give you 15 or 20 points. We have seven or eight guys that can go. And today they’re mad they can’t play another game.”

While Carter credited the Gators’ teamwork for their success, he had a little extra praise for the backcourt duo of Cameron Butler and Peytin Jackson. Butler scored 28 points and Jackson had 14 in the championship game of the Court 23 Tournament.

“They weathered the storm and got overlooked a little bit the last couple of years,” Carter said. “Their senior leadership is outstanding. When we fell apart, they put us right back together.”

With summer in the books, the Gators will take a couple of weeks off before returning to offseason workouts. Practice doesn’t officially begin for the 2019-20 high school season until mid-October and games not until November, but the Gators’ success in June will certainly make the time go a little faster.

“It’s very good to go out on,” Carter said of finishing with a tournament title. “We look at the summer as a time to grow and work on things. We went on a 14-game winning streak against good teams. To end on a high note like that is very satisfying. The month of July is going to be a great vacation.”