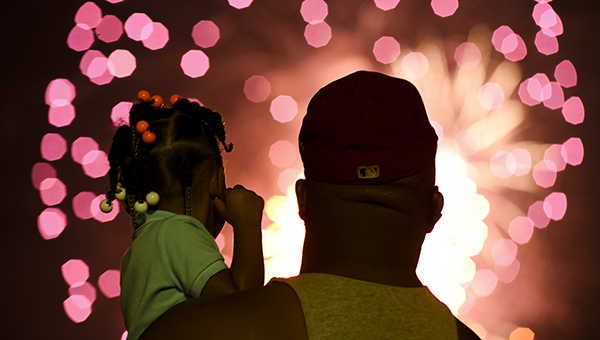 Cedric Johnson holds his goddaughter Miracle Crawley, 2, as fireworks light up the sky during the Fourth of July Fireworks Show in downtown Vicksburg Thursday. (Courtland Wells | The Vicksburg Post)

The skies over Vicksburg filled with bursts of color Thursday night as thousands of area residents and visitors watched the city’s annual fireworks display.

“I was down there (along Levee and Washington streets) earlier, watching the food trucks and people getting in and setting up.” Mayor George Flaggs Jr. said. “I believe this is the best one yet.”

The weather briefly threatened the program when late showers passed through the area before moving on.

The rain failed to force people indoors as some sought shelter under trees and others remained on the balconies at apartments on Grove Street overlooking the river and listened to music coming from nearby Mississippi Barbeque as they waited for the sun to set.

As the clouds left, the food vendors opened up with offerings including hotdogs, “walking tacos,” candy apples, lemonade, shaved ice and Kona Ice and fried pork skins and candy apples.

While the vendors were opening, other people began milling close to the Levee Street and Washington Street areas. Children slid down the slope from Washington to Levee. Some people looked at the flood wall murals.

Others sat on benches on the shore of the Yahoo Diversion Canal, while some daring souls went swimming in the canal.

Still others found their choice seats for the show.

Doris and Billy Campbell from Benton selected a spot to accommodate some of Doris’ sorority sisters.

“We do this every year,” she said. “Usually, we have about 20, but this has been a bad year, so we’re only expecting two. This is a fun place; we come to listen to the music, watch the fireworks and watch the kids slide down the hill. It’s a family place.”

Mia Pell and her daughters, Natalie, 4, and Brooklyn, 2, were sitting under the shade of a tree on Washington Street. The girls sported blue mouse ears with silver stars and red bows, and were enjoying a cheeseburger.

“We learned a long time ago to get here early and eat before the show,” Pell said. “We love the music and the fireworks.”

Just behind Mia and her family, Kathleen and Thomas McGriggs of Utica were getting settled.

“We came here last year,” she said. “This is like a honeymoon for us. We celebrated our 35th anniversary yesterday.”

Until the crowds started gathering, the city’s downtown was quiet with many of the stores closed for the holiday.

But while downtown was quiet, activity was bustling along Washington and Levee streets as some early arrivals began claiming choice spots and food trucks began setting up.

On Levee Street in front of the Yazoo & Mississippi Valley Depot, workers were getting ready for the performance by Dr. Zarr’s Amazing Funk Monsters.

“I’ve been busy since I opened at 9 this morning,” she said. “Buying customers, too. I’ve had people telling me thanks for being open. About 95 percent of the customers have been out-of-town visitors.”

One of the store’s popular items was snow cones. “I’m almost sold out,” she said.

Landers said she would probably close “once the activity begins. Come by later; we’ll have a porch full of people.”

Almost adjacent to Levee Street Marketplace, Brian Hales of Utica, owner of Acme Food Truck, was arguing with his generator. Although he has set up next to the store periodically for the past 6-to-8 weeks, he said, it was Hales’ first time for the fireworks show.

“Mary told me about it, so I figured I come down,” he said.

Just east of the food truck, Brian Daniels and his wife Daphonie of Clinton were taking it easy under a tent. The Daniels came early to find a spot to accommodate family and a wheelchair-bound relative.

“I guess we’ve been here since about 12,” he said. “The heat’s not too bad right now; there’s a breeze coming through.”

Although they missed the fireworks show last year, Daniels said they have attended the past two years.