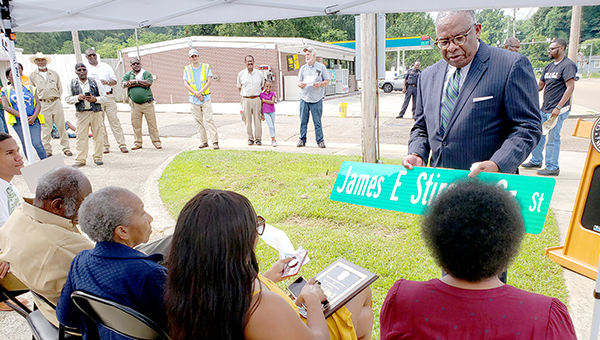 During his 35 years as an educator, James E. Stirgus Sr. influenced and touched the lives of many students and parents.

More than 100 people forgot about the summer heat and humidity to attend the program, which included the presentation of a plaque from Alpha Phi Alpha Fraternity.

Stirgus’ daughter, Ann Stirgus Marley, said her father “sacrificed some family relationships to do what he thought was right.

“There are countless stories I hear through the years of his sacrifice, his courage, to make Vicksburg a better city,” she said.

Marshall Sanders, who grew up on Marcus Street, said as a boy he admired Stigus because of his talents.

As a student at Rosa A. Temple, he said he watched Stirgus, “And he was doing innovative things that had not been done before. We (Temple grads) went all over the state, and I heard people say that they recognized in us something special. That man, J.E. Stirgus, was the man driving that. He demanded excellence.”

Sanders urged people to look at the street sign and understand “what that sign is about. I want you to talk to your children and grandchildren about J.E. Stirgus and the contributions he made to this community.”

North Ward Alderman Michael Mayfield said the Stirgus family had a legacy from their father they needed to maintain. “Mr. Stirgus, you earned it, (the street renaming) and you deserved it.”

Robert Major Walker, a former Vicksburg mayor and Rosa Temple graduate, said Stirgus had a great influence on people from Temple. The list of those people, he said, “Was too long to mention.”

“Mr. Stirgus’ influence has not just been on the black community, he has also been a force that was dealt with and brought improvements and a kind of camaraderie between blacks and whites in this community,” he said, adding the street sign will be a tribute to him.

Marley said after the ceremony she was grateful to see her father honored and by the attendance for the ceremony.

Speaking of the sacrifices her father made for the community, she said, “I could not be prouder of him for making those hard choices. This has been a great day and I hope his legacy will continue; that our young people will know that sometimes you have to take the less popular route.”