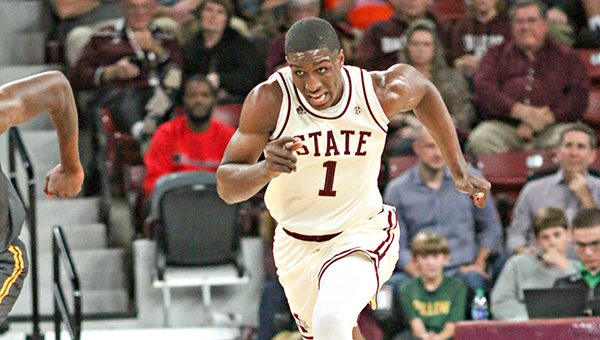 Mississippi State basketball player Reggie Perry runs up the floor during a game last season. Perry is averaging 11.5 points per game while playing for Team USA in the FIBA U19 World Cup. (Walter Frazier/For The Vicksburg Post)

July is about as far from college basketball season as a program can get in either direction. That hasn’t stopped Mississippi State’s men’s team from putting the pieces together on what it hopes is another solid season.

The Bulldogs took a break from an eight-week summer workout program for the July 4 holiday, but will return to practice Monday. With five key players returning and a strong incoming freshman class, it’s been an offseason of enthusiasm in Starkville.

“I think it’s really special to be a part of the success our athletic program is having. It’s great for everybody. It’s a good time for Mississippi State athletics right now,” head coach Ben Howland said at a press conference last week.

Perry was selected to the All-SEC freshman team after averaging 9.7 points and 7.2 rebounds per game. Perry is also playing with Team USA in the 2019 FIBA U19 World Cup in Greece.

Perry had seven points and five rebounds in a 116-66 win over Latvia in the Round of 16 on Wednesday. The United States will play Russia in the quarterfinals on Friday.

Perry also had 20 points, six rebounds, three steals and two blocks in a 111-71 win over New Zealand in the tournament opener. He’s averaging 11.5 points and 7.3 rebounds in four games.

“It is a great opportunity for him on a lot of fronts,” Howland said of playing in the World Cup. “They are playing against really good teams who are the best teams in the world. It is a very prestigious thing that he is involved with and quite an honor. Every NBA team will be there watching him play. His goal having gone through the draft process and working out for all the teams at the Chicago combine is to be an NBA player.”

Perry initially entered the NBA draft but decided to return to college for his sophomore season. Another returner, Nick Weatherspoon, had a bit of a bumpier road.

Weatherspoon was suspended late last season for a violation of team rules and missed the last 10 games.

Howland has never elaborated on the reason for the suspension, but said that Weatherspoon is back with the team.

“He’s on the team and is practicing, “Howland said. “We fully expect Nick to be available for the coming season.”

Along with the returning players, Howland was excited about some of the younger players coming through the ranks. The biggest — literally — is 7-foot center Quinten Post.

The native of Amsterdam, Netherlands averaged 15.8 points and 6.8 rebounds for Alba Berlin in Berlin, Germany, last season and will be called upon to replace departed center Aric Holman.

Howland said his staff started recruiting Post when it looked like Perry might head to the NBA. When Perry decided to return to college, it left the Bulldogs with a formidable frontcourt presence capable of both shooting and rebounding.

“At the time when we started recruited him, we were not sure if Reggie would be back. Number one, we were concerned that we were going to be shorthanded on the front line. We had to try and bolster that,” Howland said. “I think he is going to be a good player for us. He can really shoot the ball. When he was here, he played some 3-on-3 with our guys. Our players, notably Robert Woodard II and Tyson Carter, said ‘Coach, this guy is really good, and we need to get him.’ I was encouraged that they thought he was a good player based on their time with him in the gym.”

America will always be the Land of Opportunity

It’s Fourth of July weekend in America, which means it’s one of the best weekends of the year. Fireworks. Cookouts.... read more