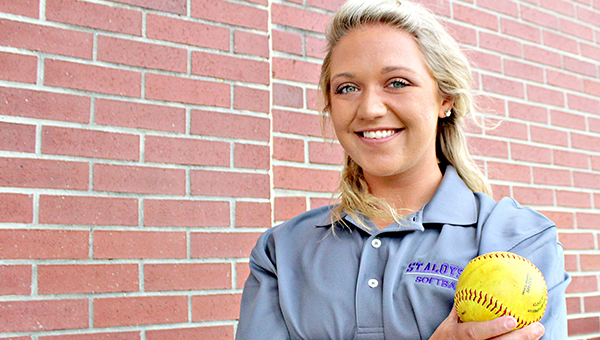 Savannah Buck is heading into her first season as St. Aloysius’ softball coach. The former player at Hinds Community College, LSU-Alexandria and Belhaven University is trying to turn around a program that has only won two games in the past four seasons. (Ernest Bowker | The Vicksburg Post)

Four years ago, St. Aloysius’ softball program was among the best in Mississippi.

Four years ago, it fell off a cliff.

The Lady Flashes have only won two games since joining the Mississippi Association of Independent Schools in the summer of 2015, after reaching the Class 1A semifinals as a member of the Mississippi High School Activities Association that spring. A stream of coaches have come and gone, each one keeping the program alive but not finding any success.

Buck, a 23-year-old former college softball player, was hired as St. Al’s head coach in May and is set to lead them into a new season beginning July 27. She knows she and the Lady Flashes have a big task to return them to their former glory, but with some enthusiasm and patience believes it can be done.

“I saw St. Al and said, ‘That’s a team that needs coaching.’ The past couple of years it’s been dead and they needed a spark,” Buck said. “We knew it was going to be hard and something we have to work at. We’ve stuck to a list of principles and philosophies, and they’ve stuck to it. It’s OK to fail. We’re learning, piece by piece, how to get away from failure.”

Buck, who will have her father Jeff as an assistant coach, was actually inspired by her own failure to become successful in softball. The Georgia native was cut from a team when she was 12 years old.

“I told my parents that this is never going to happen again,” she said.

“I want to tell these girls it doesn’t matter if you’ve never played before. You can play and learn and get better,” Buck said.

It’s a good lesson, since some of her players at St. Al really never have played before. This year’s roster includes four seventh-graders and only one senior. Thirteen of the 14 players are returning from last season, but the youth and lack of recent success are allowing Buck to start from scratch.

“Our goal (this season) is to improve better than the day before. I don’t see us winning every game. It’d be nice if we do. But we’re laying the foundation,” Buck said. “I’m going to have them for five or six years. We’re building. This is a process. We’ll eventually get to where we want to go. I can see that chemistry starting to build.”

Part of Buck’s plan to revitalize the program has included playing summer games and beefing up the schedule. The Lady Flashes have only played 10 games in each of the last two seasons — basically their district schedule — but will play 13 this year as well as four tournaments for a total of approximately 25 games.

Since there aren’t enough players for a separate junior varsity team, Buck also plans to take advantage of the traditional JV-varsity doubleheader setup where she can. The timed JV games will allow her to give her young players some extra game experience in a low-pressure setting.

Buck said she’s also taking a travel-team approach to coaching by teaching players to play multiple positions. The Lady Flashes only played four games during the June workout period, but Buck said the early results have been encouraging. They did not win any games, but were competitive in some of them.

“They’re improving. I love this team,” Buck said. “Two weeks ago we played against Vicksburg and Porter’s Chapel and we scored some runs. One thing I focus on is the fundamental and discipline and positivity, and that’s something they haven’t had in a while.”

Grabbing onto any success, Buck added, was important for a program that has had little of it for a long time.

“Our program is starting to come alive. (Other students) see us and see we’re having fun and want to be a part of it,” Buck said. “It’s starting to grow. I can see a huge difference in what it was five years ago.”